Whenever I drop a post about funky break 45s, I seem to get more comments and emails than usual. So I though this weekend I will give you some more of what you obviously like. Maybe it's just a co-incidence then that I found some dope 45s during this weekends trawl through the charity shops! wink wink maybe not. In fact, suffice to say the breaks were popping up everywhere, I guess it was just my lucky day. It wasn't until I returned to the lab though that I realised the 45s I had copped all featured old school b-boy breaks. Or maybe that's just what is programmed into my vinyl-drenched grey matter when I go out power digging (see previous posts for definition). Either way it was a nice haul.

OLYMPIC RUNNERS - "Put The Music Where Your Mouth Is" LONDON RECORDS 1974
First out the box was this little beauty on UK London Records. I have been searching for this on 45 for a while now, as I don't even have an LP version in the crates. I had to stop and think for a moment as I 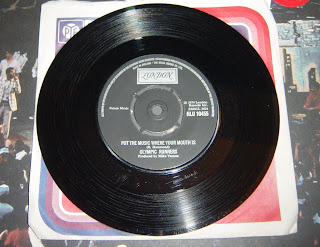 was unsure of the track title, but then I recalled Lenny Roberts' Ultimate Breaks and Beats compilation (the one with the records flying through space on the cover). This record was a must.
This track is a stone cold old school killer - I defy you to play this out anywhere and NOT get a reaction. Perfect for MCs (as it is instrumental) and b-boys to do their thing over. Check back on your old school tapes and this one will pop up frequently. Dope shiznit!
Put The Music Where Your Mouth Is


THE TEMPTATIONS - "I Need You" GORDY RECORDS 1973
Once again this track appears on a lot of old school tapes, possibly because the dramatic string section breakdown and funky drums are so f#ckin' intense. If I remember correctly, I have also heard this dropped back-to-back with 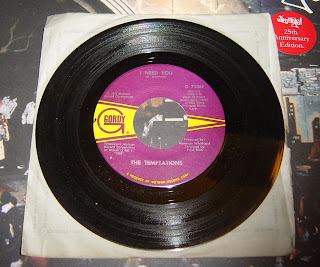 E.U.'s "Freeze" instrumental as this track also has a similar horn breakdown. I can't remember which old school jam in particular but it raised the roof with the crowd! If I find the said tape I will happily upload a clip for your listening pleasure. Or if you know the one I'm referring to and can find it before I do, then please lemme know?
Getting back to the track, it doesn't actually feature a whole bar of drums, so it's not a "true" drum break in that sense, but the breakdown is so fierce and the drum rolls are so funky that it was spun by the pioneers for sheer crowd reaction. Produced by Norman Whitfield, and also featured on their LP entitled "1990" which is a bargain bin special. Keep your eyes peeled. I personally love this track and have dropped it a few times on our BREAKS FOR DAYS radio download.
I Need You


L.T.D. - "Love to the World" A&M RECORDS 1976
Once again we have another track with "love" in the title, just as with the ZZ TOP post. But please don't take that as a clue to finding a break record cuz it's purely co-incidental. Now at first I thought I had already dropped this funky 45 on you, but I cannot find the post on searching through the older pages (did I really write all these??). So if I am repeating myself, remember like SPOONIE G once said - "I ain't just a fool, I'm an OLD fool!" 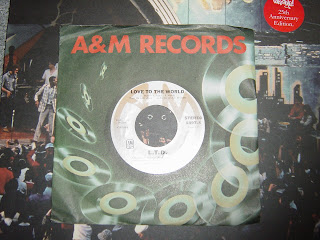 My man BREAK DJ LEACY first played me this record, and I believe it also featured on his dope BREAKSPLOITATION break comp series (check 'em out). Once again it's an old school b-boy favourite, despite the fact that producer Larry Mizell makes us wait through three whole minutes of STYLISTICS style singing until the funk eventually drops! But as with all good b-boy records...the wait is worth it. On this break the drums are very much on the downlow, and the plucky electric guitar gives us the melody and rhythm for the dancers. But from the string intro and bass guitar (which I can only describe as sounding like a wobble-board) in the intro onwards it seems a very unlikely candidate for holding a b-boy beat, and the emphasis is definitely on "love to the world". An uplifting disco track if ever I have heard one, mainly due to the seductive string section and catchy chorus. I have yet to find this track on any of my old school tapes, but I have it on good authority that this track was a dancefloor sureshot back in the day (DJ LEACY hung with, and deejayed for PRINCE KEN SWIFT of ROCKSTEADY CREW for a few seasons).
(Great A&M 45 sleeve too - looks kinda like the UBB LP cover I mentioned above)
Love To The World

I see a circle developing...

Great post Kid Dyno ... some killer finds for sure.

Makes me want to go and get those fingers dusty. :)

The Olympic Runners LP 'Out of the Ground' also has a couple of drum breaks and I found that for pennies in my local Oxfam.