The year was 1987, and hip hop music was beginning to take on a new sound. New and more advanced music technology now allowed greater use of lengthy samples in the creation of a hip hop beat. Producers also realised that it was possible to loop a complete drumbreak for it to be used as the basis for a track. 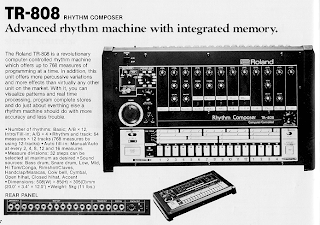 Hence the demise began of drum-machine based beats, despite the fact that DMX and ROLAND TR606 through to TR909 drum machines had dominated the music for so long.
Although a lot of hip hop collectors I know will buy very few releases from before this '87 timezone, and particularly from the "stupid fresh" era. I can appreciate that in 85, 86 and 87 some corny samples, badly programmed drum machines and bugged out lyrics can make for poor longevity where hip hop records are concerned.
But there are a few absolute

killer tracks pre-1987 with dope drum machine beats, before sampling drum noises really took off. Hopefully I can uncover a few of these you don't know already....plus a few of the joints from later in 87 using the newer technology. From '87 on most often the weapons of choice became the EMU SP12/SP1200 drum machine coupled with AKAI S950 sampler - these became the standard for making hip hop beats for a long time to come.
I love to hear lengthy well-chopped samples particularly the later 80's heat, but I will still listen to a dope TR808 or TR909 beat from the early or mid-80s and instantly think to myself "ahhh ... now that's Hip Hop!"


SPEEDY G and DJ TIZ - "Get Down" (APRIL RECORDS)
SPEEDY G certainly lives up to his name here dropping lyrics over this fast beat! Aggressive stuff outta Philly as you would expect, 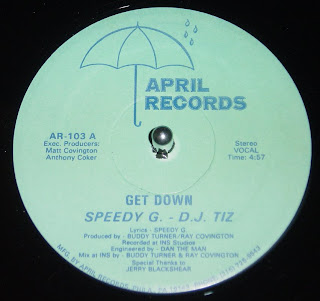 with some forceful beats and nicely performed cuts provided by DJ TIZ. On Philly's tiny label APRIL RECORDS, the same label as RHYTHM RADICALS "Dig the Move" and GORGEOUS GEORGE "Cabbage Patch Scratch".
BUDDY TURNER and RAY COVINGTON get the production credits here, and DAN the MAN is credited for engineering at INS STUDIOS.
SPEEDY G & DJ TIZ - "Get Down"


PRIME TIME - "He's Def" (HITS IN THE GROOVE)
A hardcore west coast record if ever I have heard one. Seriously under-rated and rarely played on internet radio - yet it is 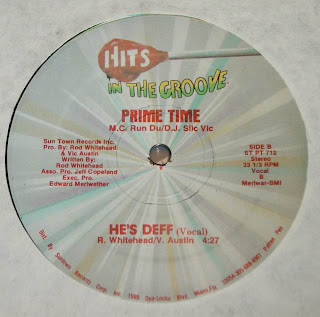 the source for most DJ's use of the "You can't get much fresher than this!"" sound sample. Both sides are raw, and to be honest I struggled to decide which track to upload, so good are they both. I decided to go for "He's Deff" because I love the use of RALPH MACDONALD's "Jam on the Groove". Dope though it may be, this track very rarely costs a lot to pick up and also appears on the SUNTOWN label as well as this first release on HITS IN THE GROOVE (which has a great company sleeve which looks like a turntable!). Once again heavy scratchin' is the order of the day here thanks to DJ SLIC VIC, and as you would expect from the west coast, their DJs rarely disappoint. And MC RUN DU is no wack emcee either, although here he is shouting the corner for his partner on the wheels of steel!
PRIME TIME - "He's Deff"


POET - "All Hell Breakin Loose" NU-SOUNDS RECORDS
I have always been a fan of POET, or ROCKWELL NOEL, or BLAQ POET - however you know him and his many reincarnations. And back then in the 80's when he dissed KRS, BDP, KOOL MOE DEE, RAKIM, COOL J and ULTRAMAGNETIC on wax, 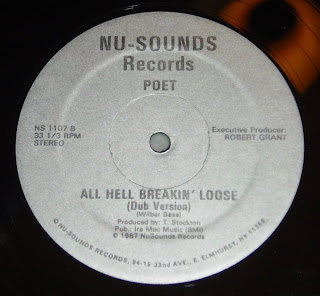 few thought he would live long enough a career to complete his claims. I'm sure many of you will be aware of the stories of JUST-ICE seeking out POET in his Queens hood with a view to a beatdown.
But to this day he is still dropping hardcore records with the legendary PRIMO by his side on production. You cannot dispute that POET got longevity as an MC. And his material with PHD deserves a whole post of it's own!! I'll leave that to another day.
But for now take a bite of "All Hell is Breakin' Loose". When I first heard the keyboard and electric guitar hook in this track, I wasn't that excited by it. But it's a joint that really grows on you, and POET carries the flow of the record in his inimitable style - dissing ALL competitors!!
POET - "All Hell Breakin Loose"


ALLIANCE - "Bustin' Loose" (FIRST PRIORITY RECORDS)
One of my favourite releases on the FP label without question ... and this comes from a big AUDIO TWO fan. And possible one of my favourite jams from 87 full stop. This track to me epitomises just how funky '87 hip hop can get. The "And now Ladies & Gentleman...the moment you have been waiting for..." intro sets the atmosphere, followed by some seriously slamming drums (sounds like an SP12?) with some dope string stabs dropped in by DJ SKILL. The crew chant for BROOKLYN, then KING OF CHILL and K-SWIFT really excel themselves on this track, and every line seems to be a hip hop quotable or killer punchline. In fact, all three joints on this 12" release make it worth 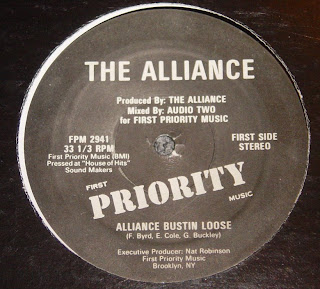 every penny of whatever you have to pay. Have a listen to the snippet of "Bustin' Loose" and tell me this shit ain't fresh!
Black label FIRST PRIORITY 12" (although this 12" is also available on the more typical red FP label), but this US OG has CSB and 2 musical notes etched in the run-out groove.
THE ALLIANCE - "Bustin' Loose"

Yo, THE ALLIANCE "Bustin' Loose" is FRESH...should upload the whole song...PEACE...

kid dyno, i am find some good stuff in your blogspot , thx for yours uploading and post , good jop guy , post more ,,,more,,,,i am a bboy , i like breaks rare groove ... could i add your msn ?
mine is kenbelove@hotmail.com

Yeah man, really interesting, I'm embarressed to say I have'nt heard any of these before... That Prime Time sounds like its got a bit of Funkin' For Jamaica by Tom Browne too.
http://www.youtube.com/watch?v=uuUy2ShGLyo
Happy New Year bro!

Word, always been a fan of the rap in the 85-87 era, much more so than the keyboardy electro type rap at the time.

And hey, never seen that version of the "Prime Time" joint before, I've got it on SunTown though....

Wow heavy props on the Blaq Poet joint havent heard that in years. Im going to post it on my blog and give props to you, if for some reason you want me to take it down just let me know. I'm really into the queensbridge shit, check hiphopgiant.blogspot.com for some dope 90's vinyls. Peace, and keep doing what you doing.

Cool thanks for passing through guys.

HHG I'm a check your blog in a minute, but thats cool to link up the ROCKWELL NOEL record....we're glad you're feeling the beats on our page! NOEL is a legend for sure, never afraid to speak his mind LOL!