Thanks to everyone who voted for WARLOCK RECORDS in the label poll, here goes...

Possibly best known for releasing early material from the JUNGLE BROTHERS, WARLOCK RECORDS was another of those 80's labels that released some great hip hop music. But hardcore hip hoppers will remembert WARLOCK for bringing the legendary TUFF CREW to the masses, after they purchased the SO DEF label and re-named it SOO DEFF.

WARLOCK RECORDS was founded in the late 1980s by ADAM LEVY and went on to release many classic hip-hop, techno & house, and also launched the career of house legend TODD TERRY (who also produced some dope hip hop beats!). Sub-labels included LIGOSA and IDLERS - again responsible for some great hip hop releases. In 1994 WARLOCK also acquired the SLEEPING BAG and FRESH RECORDS' catalogues, and more recently some of the releases have also been picked up and re-issued by Traffic Entertainment.

Now let's dive into the WARLOCK crates and drop a few gems....

TUFF CREW "Days Of Our Lives" WAR-106 1991
TUFF CREW really need no introduction, other to say that everything thing they released is worth copping, but you know that already. 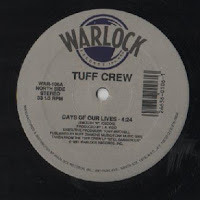 DAYS OF OUR LIVES is a later release from the crew, but still sounding on point with LA KID and ICE DOG rhyming hard over MYRA BARNES "Message from the Soul Sisters". Not quite as strong a track as NORTH SIDE OF TOWN or SHE RIDES THE PONY, but sounding more like an early gangster rap record. I believe by this time TUFF CREW were disbanding and as the intro suggests "this record is a message for ya three blind mice who refuse to see what's going on ya know what I'm sayin'?". Mmmm... read into that what you wish.
DAYS OF OUR LIVES


JUNGLE BROTHERS "On the Run" WAR-022 1988
The sound quality ain't great on this record, both because my personal copy is kinda trashed, and from the fact that early JUNGLE BROTHERS joints were recorded with DJ SAMMY B cutting up the beats live rather than using 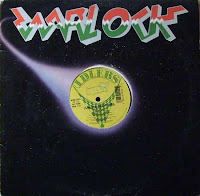 sampling equipment. I'm not sure whether this was done for budget reasons, or to gain that "live" feel on the tracks. Take a listen to their "STRAIGHT OUT THE JUNGLE" LP and you will hear what I mean.
Despite the lack of sound quality, "On The Run" uses some classic breakbeats to great effect - BABE RUTH's "The Mexican", RALPH MACDONALD's "Jam On The Groove", JIMMY CASTOR's "It's Just Begun" and "I Can't Stop" by JOHN DAVIS & THE MONSTER ORCHESTRA, all dropped in where necessary by DJ SAMMY B.
ON THE RUN


KROWN RULERS "Paper Chase" WAR-036 1988
Another favourite Philly joint for the random rap brigade, but don't get it twisted, this is how dope late 80's hip hop sounded, and KROWN RULERS were also BIG back in the day in NYC. "Kick the Ball" is a stone cold killer if you ain't heard it, but right about now it's their biggest and only 12" release "Paper Chase" that we're gonna feature.
Produced by DAVE and TONE LOVE from the TUFF CREW, this track rocks from the dope "Get Down" scratching by DJ GRAND POOBAH in the intro right to the very end. ROYAL ROCKER's rhymes are tight and to the point, and you would be hard pushed to find a wack line.

"The editorial prince above all MCs,
Commentarial whip, legit to a degree,
Executing deejay ROYAL ROCKER my handle,
Crews that broke give thanks to the old school,
Twenty four track lyrical braniac,
B-boy team they improvise in back,
Vocab pure, to never let 'em score,
I'm the GRAND POOBAH adversaries I war,
Eliminating... competition I face,
Rhyme wizard with the dialect,
I'm on a paper chase"

"ain't it good to ya" scratch

The KROWN RULERS are step... the funky duo's kept,
Hardcore in effect while dissing your tape deck,
I'm making records - similar to none of you,
Miscellaneous poets that just wanna do,
A show here and there, to gain dollars,
Glory to the rappers that wear blue collars,
Elevation... mean serves are due,
If I fall to alter each rhyme for your virtue,
I'm a new king not because one fell
Any that I battle... ask they'll tell,
Straight up why? cuz the language is ace,
Do good to be great... I'm on a paper chase.
PAPER CHASE 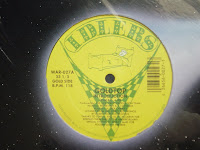 This record was originally released on UK GEE STREET records, but then later picked up by WARLOCK after much play on radio and influence from MARLEY MARL. I'm not normally one of RICHIE RICH's biggest fans, but I love this record, and GOLDTOP (a white dude with blond hair) ceratinly rhymes tight.
MY INTRODUCTION 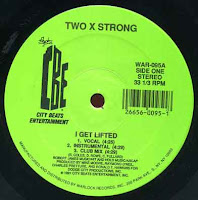 piece to track down. This one will not be to everyone's taste, but I like the beats more than the rhymes on this record. Using the THEME FROM SWAT as well as a circus style sample which I recognise but just can't put my finger on where it comes from. Like I said the lyrics can be kinda confusing at times, but the weirdly arranged beats are kinda catchy. This track is actually the b-side to "GET LIFTED" which uses KC & THE SUNSHINE BAND's classic break. Produced by DODGE CITY PRODUCTIONS.
LYRICAL MADNESS


TAKING YOUR BUSINESS (T.Y.B.) "Just Got Laid" WAR-034 1989
Once again RONDO and SUPERB bring us another slice of funk TYB style. Their previous release LONG LIVE HIP HOP and IT'S THE NEW THING are also must-have records, and JUST GOT LAID is classic also. The title gives away the subject matter here, and the beat is funky like some unwashed socks! JUST GOT LAID starts with an infectious bassline, and some whoops and barks from the crew to get you hype. An addictive guitar lick then provides the back bone of the track(sample is 'Memphis Soul Stew'), with some funky horns scratched over the top at just the right moments. Rondo (pronounced Rondoo) tells stories of hitting the clubs in search of skinz to hit.
The b-side cut "Show 'em How it's Done" is also a tight track - BUY IT IF YOU SEE IT!
JUST GOT LAID


MINISTERS OF BLACK "One of a Kind" WAR-056
A strange sounding track if ever I have heard one, mainly due to the screaming horn sample used, and the odd rhyming style. Plus some of the vocal hooks used are a bit suspect - I will let you decide if this is dope or dogfood!
ONE OF A KIND


KING TRE "Damn I'm Good" WAR-017 1988
Man I love this record. KING TRE's lazy laid-back style makes him sound like a sleepy JIMMY SPICER on the mic. And I like the simplicity of simply 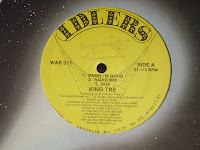 rhyming over JOHNNY JENKIN's "I Walk On Guilded Splinters" break but with not much else added. Sometimes less is more as they say.
It took me a while to track down a copy of this dope joint, and I have yet to see one since, but I guess it ain't that rare as WARLOCK distribution was widespread. But it barely gets a mention amongst hip hoppers apart from appearing on the odd mixtape here and there.But the track is certified dope and with the "damn I'm good" scratching and bragging rhymes it is an essential IDLERS release.
DAMN I'M GOOD

NDODEMNYAMA "Free South Africa" WAR-067 1990
Man this has to be the biggest ZULU NATION posse cut in history. The who's who of artists appearing on this anti-apartheid release reads like a page in hop hop history - AFRIKA BAMBAATAA, 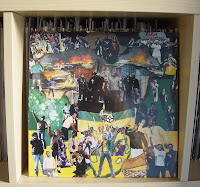 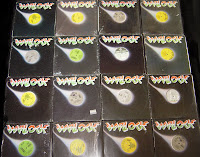 (click on photos to enlarge)
I'm reading: Warlock RecordsTweet this! Posted by Daily Diggers at 10:35

Yo Dyno...long time reader, first time poster...Thank you so much for these classic Warlock joints...this blog is the ish!

It's a pleasure man, and thanks for keep checking back on BREAKS FOR DAYS. It's comments like that that keep us going!

I hope some of these joints are new to you.

Hey, wicked serlection but where be the Ministers Of Black 'Step In My Offfice' 12?, was a fave. Extra Curricular have a dope 12 'Shotgun' which i still own..

MC GoldTop 'My Introduction' was a tune!..I think i must have spent the most of 88 listenin to electro 21 for that King Tre tune amongst others..this blog is serious, takes me back to high school!

cool I'm glad you like the blog, you obviously get the same feeling from hearing this stuff as we do.

Please add your name and let us know where ya at-at-at??

That 'circus' sound you refer to on the Two-X-Strong cut sounds to me like the intro to Fun by Sly & the Family Stone - also used by Beck.

Keep the good ish up -

the Warlock Wallpaper is vicious!!! What a good look :)