Those dudes DJ PRECISE and DJ OLSON, known collectively as P&O, have been busy again on the funk tip; you may remember back in FEB last year we featured their P&O Cross Channel Mix. Well lately PRECISE and OLSON are working hard with their brainchild MUSIC de BEAUVOIR live band with the two DJ's at the helm. This is some serious shit no doubt, and will appeal to the break cats and funk heads amongst you, with some SICK scratching too for the Hip Hoppers. 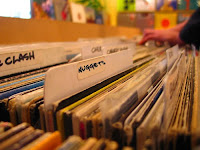 PRECISE & OLSON began producing for MCs, including thier own VINYL DIALECT projects on BAD MAGIC RECORDS, and performing in the DMC DJ CHAMPS as THE PLAIGAWRISTS in the mid 90s. But now their quest for the perfect sound has lead them in a 360 degrees journey - firstly they were sampling records for their trademark sounds and samples, but now use live artists and instruments to re-energise those studio productions with more of "the funk" and a live feel. The results are pretty damn fantastic, and the result is MUSIC de BEAUVOIR - a 10-piece prog-hop orchestra fusing together turntablism and samples with the more old-school components of a jazz/funk band. The music takes its roots in some of the more adventurous library music of the 60s and 70s - labels like Boswoth, Conroy, KPM and, naturally, Music de Wolfe. This music has been sampled by P&O in their deBeauvoir town studio, and turned into tracks that they have then scored for a big band.
Check this live shit out from 1001 Club in Brick Lane EAST LONDON. Don't front on them drums....!

For more details, and more KILLER tracks check 'em out at....MUSIC de BEAUVOIR and check out this track "AVATAR" featuring the awesome voice of POLLY GIBBONS. It's a lo-fi copy for obvious reasons....but keep your eyes peeled for a forthcoming seven inch 45rpm single.

And to promote their forthcoming "NUGGETS & GEMS" night in East London this summer/autumn, we have a funk mix from PRECISE & OLSON to get you in the mood. The night will be a mix of old school break and beats, live funk action, turntable wizardry, and some other shit you ain't seen before. As soon as we know more here at BREAK FOR DAYS we will keep you informed. You could never say that these P&O guys are lazy...cuz it's "beats, beats, beats" whenever we talk to them. Just how we like it!

I'm reading: Nuggets & GemsTweet this! Posted by Daily Diggers at 12:32

Those dudes always came with the illness in those Vinyl Dialect days. I'll be sure to check them out live if I'm in the Smoke (as I seem to be more and more these days)

Great blogging again fells, even if my man Werner called you out over the Doug Ghostbusters ish. Almost makes me pine for the tape I used to own. Never mind eh?!

fantastic fellas!great to see the duo still in action cuttin' it up!,music sounding wicked,even doper now with the jazz/funk band makes sense,keep up the great work!.

I finally got me a copy of the Roy Williams Trinity album at the booty this morning-HEAVY!.Thanks to the Vinyl Dialect crew and Stasis for putting us up on that heatrock of a break beat!..and still one of my favorite album covers!..ever..pure class....lol.
P.