At the moment here in the UK, Ray Parker Jnr has resurrected his "GHOSTBUSTERS" theme for a TV advert, and as annoying as that may be, it reminded me of the dope 12" single DOUG E FRESH dropped in 1989 for the 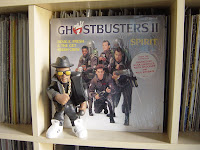 GHOSTBUSTERS II soundtrack. Entitled "Spirit", and only loosely referencing any kind of ghostbusting activity. More a display of DOUG E FRESH's inimitable style and beatbox renditions. And no sell-out weak-ass joint either (as were some joints on soundtracks with the exceptions of Gunman, Boyz n Tha Hood, America's Dying Slowly etc) as DOUG E proves he is still THE GREATEST ENTERTAINER.
I have to give props to AROE of the SOUNDMAKERS for kicking me in the head with this joint - the HANK & KEITH SHOCKLEE remix had slipped me by somehow.

Remember how people like DOUG E FRESH, BIZ, BUFFY from FAT BOYS, and DMX the HUMAN BEATBOX had a massive influence on the world of Hip Hop. If it weren't for these originators, there would be no RAHZEL, and if there were no RAHZEL there would not be the thousands of HUMAN BEATBOXERS we hear today - it has now become an accepted form of musical creativity. You may have seen the Youtube footage of everyman and his dog beatboxing with a flute or harmonica......well keep locked to BREAK FOR DAYS as in the next few weeks we will feature some of the original human beatbox action from the early days of rap on wax. As a taster, peep this dope footage below about DOUG E FRESH.....and have a laugh at the dude with the red and white trucker cap, he needs to get off the crack!!

EDIT: Hmmm it seems I need to listen to the lyrics MUCH closer - check out our fellow blogger WERNER VON WALLENROD's answer to this post. If you watched GHOSTBUSTERS II more closely than I obviously did, then it seems DOUG E FRESH does in fact understand the paranormal activity threatening New York - peep it here. Thanks WERNER, I'm glad someone is paying attention.
I'm reading: Who Ya Gonna Call? Doug E Fresh!Tweet this! Posted by Daily Diggers at 12:34