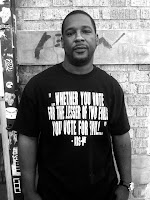 Whether you know him as OC, Omar Credle, or as Mush, you cannot deny this Brooklyn brother got skills on the mic. Both "Word..Life" and "Jewels" are serious LPs by any rapper's standards. Here's a version excursion on OC's classic joint "Time's Up". I know it's hard to fuck with a classic, but hopefully it's a refreshing change from the original. Let us know in the comments what you think.

"You lack the minerals and vitamins irons and the niacin
Fuck who that I offend rappers sit back I'm bout to begin
'bout foul talk you squawk never even walked the walk
More less destined to get tested never been arrested
My album will manifest many things that I saw did or heard about
or told first hand never word of mouth
What's in the future for the fusion in the changer?
Rappers are in danger who will use wits to be a remainder
When the missile is aimed, to blow you out of the frame
Some will keep their limbs and, some will be maimed
The same suckers with the gab about, killer instincts
but turned bitch and knowin' damn well they lack
In this division the connoisseur, crackin' your head with a 4x4
Realize sucka, I be the comin' like Noah
Always sendin you down, perpetratin' facadin' what you consider
a image, to me this is, just a scrimmage
I'm feel I'm stone, not cause I bop or wear my cap cocked
The more emotion I put into it, the harder I rock
Those who pose lyrical but really ain't true I feel"

a smooth, understated remix.
nice one!

this track has been on constant rotation this week alongside Violatin' (Count Bass D) and The Cold Vein LP (Cannibal Ox) and i still think it holds it down...
good work.

Yo fellas, the beat is actually courtesy of my man my mellow DJ SKYE (a shadow member of DAILY DIGGERS) also from London. Trust me his beats are phenomenal, and his skills go back to the early 80's. Unfortunately he also has unreleased work featuring EL DA SENSEI, WORDSWORTH and other known MCs, but this project doesn't seem to be getting a release.

YO SKYE if you are reading this I need to talk to you about this ... hip hop heads NEED to hear this project.

i got sum of his stuff on my computer whenever i need a tight beat with some evoking samples i go straight to them..bad ass producer,in my top 5 UK of all time
and right up there with NY's finest in my book.

btw,after givin the 'time's up' remix another listen you can tell the quality is that of a proper SKYE beat..very nice.P