Now it's not like me to have a rant here on BREAKS FOR DAYS, but this week BRITISH RAIL got me all stressed, so today they get the dilsnick! The mission should have been a simple one - hit some record spots with my man DJ OLSON, pick up a few crispy breaks, and then back to the P&O lab for a beat session.
In their infinite wisdom BRITISH RAIL have decided lately to perform engineering works at weekends (so as not to inconvenience their precious commuters into London. Yep that includes the same bankers that have single handledly fucked our economy!). The result is a series of poorly timed, and lengthy bus journies for the rest of the public just to get across town on a Bank Holiday Monday. 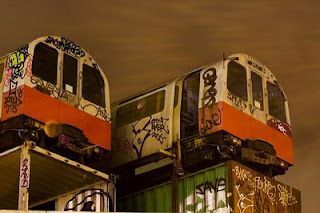 But no trains! So what I actually got was a few hours shuffling through the crates at various record shops, then followed by 3 hours on a rail-replacement bus just to do the 20 miles or so back home! That bus broke down, and had to be replaced. I guess by the rail-replacement replacement bus! For f#ck's sake I'm not normally one to complain, but I could have travelled to Spain in the same time!
But there was no way I was gonna let this ruin the day, and luckily DJ OLSON convinced me to hit a small bookshop in DALSTON, East London in search of a dusty beat or two. Essentially a bookshop, but with a small doorway leading to a basement (maybe bedroom size) with walls covered with record sleeves. I like this shop, 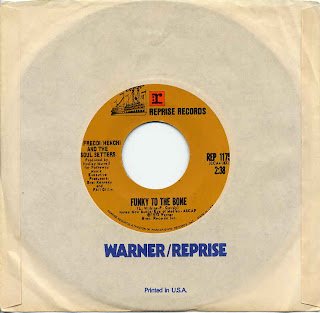 as you can browse with ease, and also listen to stuff before you buy. But most of all, the prices are cheap. Everything is £6.00 or cheaper, can't be fairer than that.
Straight out the crates was a C.C.S 45rpm with a nice hidden drum break. Plus the FREDDI HENCHI 45rpm that BEAT JUNKIE DJ BABU cut up on a DILATED PEOPLES track on the FUNKY PRECEDENT LP - trust me you'll like this one.

...and as for the tough drums on the C.C.S. 45rpm, here's a little snippet of the record, and then I will quickly loop up and fatten the drums.


Before the bookshop, I had crept into Music & Video Exchange in Camden Town - what's up to TOMMY KOI who works there, thanks to him for putting me up on a SAMBA SOUL LP full of disco beats for the b-boys. In that shop I also copped another "Brasilian Hustle" 45rpm by ALICE STREET GANG (a Bambaataa spin).

Nice finds, but a bullshit journey! In future I'm gonna....

Damn dynO, that sounds like the journey from hell dude.! Nice to hear it didn`t put you off your mission with Olson, cratediggers will overcome anything to get their fix of dusty vinyl..!
Man, that bookshop sounds the business, a vinyl fiends dream. You can`t beat a nice secret squirel spot ;o)
As for the drums on that C.C.S joint, they sound sick D, especialy when looped up.
Glad you copped some goodies, did ya boy Olson bag anything..?
On a side note, i saw your partner in crime, the Beat Detective hit the car booty real hard the other day & bagged some bargain breaks & hip hop. Sounds like the DAILY DIGGERS are living up to their name...! Speak soon D, mart.

another great entry. i'm currently putting together a piece on doublegoose jackets for crooked tongues. can't get your email addys - would you be able to answer a few questions about collecting and digging for doublegoose to put into the piece? apols for the unorthodox way of getting in touch, but it'd be remiss to put it together without chatting to you.

some wicked wax finds Dyno!wasnt up on that Alice street gang 45.thanks.P

how you doing guys?

totally feeling you on British Rail...can't go to Roast's spot on a saturday because of them!

Gary, I've dropped you a mail. Let's get down with the goosedwon!

Mart - you know I can't let those bastards grind me down. Even if it means going digging on a push bike, I will MAKE that trip whatever. Nothing can keep a man from his records!

MrThing - what's up fellow wax catcher!
I'm sure there's no lack of vinyl in the MrThing lair LOL.. hopefully the train problems won't last long and we can rape the city's crates once again.


P - I gotta rock them disco breaks for the b-boys! The essence of hip hop.

ps. get peddling this weekend KID & get those fingers dusty..! ;o)

Thanks for the mention Dyno.
I've got the Freddi and Henchi album, theres guite a few nice breaks on there.
Tommy Koi