BACK TO THE OLD SCHOOL! Thanks to everyone who voted on which Hip Hop crate to delve into this week - a resounding victory for those who voted for 1984. But thanks to EVERYONE who voted.

1984 is obviously a popular year in rap music, and it's no surprise when you listen to some of the records that hit the streets that year.
At home here in the UK, the STREETSOUNDS ELECTRO LP compilations were in full effect in 1984, and any 12" releases from those comps were hot property amongst UK hip hoppers. Back then GROOVE RECORDS in Greek Street, London was no doubt the place to go to grab the latest 12" arrivals from the States. I was only 13 yrs old at the time, and at that age if you DID manage to get into London unaccompanied by parents, you still had to fight your way into that tiny shop tucked away in the Soho area of LONDON. 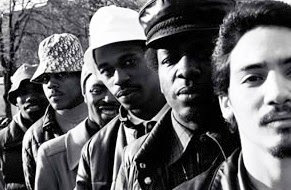 And if with your parents then Soho wasn't exactly the kind of place they would wanna take you (prostitution was rife there). But in the playground on a monday morning, many kids had records to show for their weekend efforts...so I just HAD to get mine and GROOVE became a regular spot for years to come! Thanks to those that worked in GROOVE, I remember Jean was always very obliging.
Anyway, hopefully you will recognise and enjoy some or all of these 12" tracks - all of them made a mark on me in some way. I've dropped an hour's worth of classics straight from the '84 crates, but please remember these records are now 25 years old (and I'm no spring chicken either!) so some of these do sound their age. And I've included my favourite COLDCRUSH BROTHERS record (see photo). Once again static and crackles included at no extra cost.

I got into Hip-Hop in the 2nd half of '83 but 1984 was the most important and exciting year for me.
Me and my mates tried to find Groove but always got lost in Soho.
Tommy Koi

I definitely hit up Groove Records back in the day. I bought many 12" and of course those street sounds mixes. American stationed in Suffolk at US Air Base.