Since the early days of Hip Hop on wax, many a record has been released where the original sample used is such a stone cold killer, that it then becomes "re-cycled" by another beatmaker or emcee.
Even back in the early 80's during Hip Hop's infancy, it was not unusual for an MC to simply rhyme over someone else's instrumental, and then release their "version" while the beat was still hot. The quick turnaround of vinyl pressing back then meant that it was often only a week or two before the "re-cycled" record hit the streets. If you listen to BUSY BEE's "Making Cash Money", you will notice the backing track is identical to SPOONIE GEE's "Spoonie Gee is Back" (both on SUGARHILL RECORDS). Other early examples include....

This phenomena has been happening throughout many years of hip hop music (please feel free to add other records that spring to your mind in the comments section below) and countless records have re-used a well-known sample, or flipped it a different way etc..

Today I wanna concentrate on one of my favourite sample tracks of all time. It has been flipped and re-flipped by different crews, but every time I hear it used I love the outcome. The track in question is "HOGAN'S THING" on the well known LIBRARY LP series DE WOLFE. Now the name may not be instantly recognisable, but I'm sure when you here the beats you will be saying..."Oh Damn!". 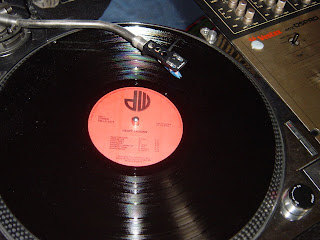 "HOGAN'S THING" appears on the DE WOLFE LP entitled "HEAVY TRUCKIN'" from 1973. These Library LPs were intended for use within the TV and Film industry to provide background music relevant to the theme of the show. Many well known TV series' plundered the DE WOLFE archives for dramatic sequences and scores, including THE PROFESSIONALS and THE SWEENEY.
Speaking of THE SWEENEY, this is how I first heard "HOGAN'S THING". All of you SWEENEY fans out there will be aware that the pilot film for this superb 70's TV series about SWEENEY TODD (aka the Police Flying Squad) was a film called "REGAN". The intro to the film used "HOGAN'S THING" as the eerie music in the intro when a badly beaten policeman wakes up after having been dumped on the shores of the river Thames in London. Check it out below. Hogan's Thing is about 30 seconds in ... but the whole score to this film is incredible - seek it out if you can.

"Ah that's the sample" I hear you cry! You may know it as sampled by JAY-Z on the DAME DASH LP, or before that used by DILATED PEOPLES's DJ BABU on his "Bonus Beat" but recently I spotted a MONEY BOSS PLAYERS video whilst peeping the new shit on HIP HOP BATTLEFIELD (what's up to DRASAR MONUMENTAL!) where EDDIE CHEEBA spits lyrics over the very same sample. Which do I prefer the best? I'm not sure. Have a listen and I will let you decide.


Who rocks the beat the best? You decide.

Another great post as always! You guys inspired me to wake up early yesterday to do a little diggin which I havent had alot of time to do lately!

sorry for going with the obvious but jay just killed it. also made me a little sad cause it reminds me of how much he's dropped the ball.

Yes spotrusherz, Jay certainly makes that beat his own. He can kill it when he wants to, that beat is 2002 ish so he still has the fire in him. Have you heard his latest "Death of Autotune"?


Hey SKEME my mellow, good to hear you still get those diggin urges!
What did ya find on your travels? Were you rewarded by your early start?

Yo good looks on dropping me a little shines famz...Keep dropping that heat..

What's up with the new remixes ? Drasar Monumental NS/UZN/GBK

No mention of El-P's use of the Hogan's Thing for Bee Aware back in '99 which he also gave to Mr Lif for Arise. This was my favourite version.

yo Leeroy I didn't know the MR LIF joint, thanks for that. I just peeped that on youtube. Thanks for the schooling,

No probs Dyno, glad I could help ;)