I copped two records this week whilst in my "break to the beat" mode. Recently I heard someone play a copy of 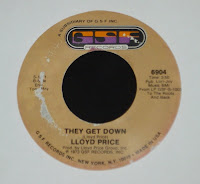 LLOYD PRICE's "They Get Down" track from 1973 on GSF records and realised
that it was the horn loop used by DJ PREMIER on BIG SHUG's track "The Jig Is Up". Still with me? Well, 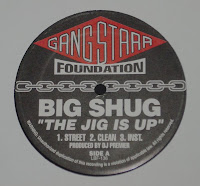 suffice to say that I didn't own either record and felt I needed to correct that. That's unusual for me not to have a PRIMO joint if it's a banger. But that was only a short term problem until this week when I finally found BOTH the "JIG IS UP" bootleg(?) 12" and the LLOYD PRICE on a GSF 45rpm single. And as a funk track goes the LLOYD PRICE is tough, but there's no doubt it's those funky horns which PRIMO flipped that catch your ears every time. Once again the former GANG STARR beatmaker takes something simple and makes it extra-dope using his trusty formula. He certainly has an ear for that hip hop sound. Check out both the soundclips below...

THE JIG IS UP

Funky stuff fellas....Damn they must have some ill record shops in your area ....I need to make a trip over there soon and go hunting....

I knew where I could find the BIG SHUG 12" - it had been lying dormant in a regular spot I hit. And the LLOYD PRICE - it's amazing how quick you can find a joint when you know the title. That was another £1 record, and I picked up 2 copies of the 45 at the same time.

D the record shops here in London have thinned out dramatically and diggers have been complaining, but YO records haven't disappeared...! They're still out there to be found but it means travelling further between spots.

Plus my sixth sense of smelling records from a mile off always helps ;o)

Great to see you here DRASAR as always.

awesome stuff!Primo flipped that isht the only way possible, what a track, Dyno!nice break to the beat exclusive.
P.

Gotsta cop this lot Dyno, cheers for this excellent post as usual..Daily Diggers never let you down.Paul C. was simply a genius, I wonder what his beats would sound like now?, anyway full propers mate. P

I always liked the Primo flip more than the OG track :) BTW was there ever a legit release for this?

Yeah, Primo is that dude...dope flip and really, an even doper find IMO....