Stacks of Wax - good or bad?

Record collecting can lead to obsessive behaviour. There ... I've said it now, and it's certainly true of many in the diggin' game. I never set out to be a collector, and have never considered myself a "collector" per se. I just fell in love with hip hop music at an early age (when 12" singles were the format of choice), and I wanted all the dope records AND to become the baddest deejay on the wheels of steel. OK so the latter part never happened, but as far as dope beats are concerned, I got big guns and lots of ammo! 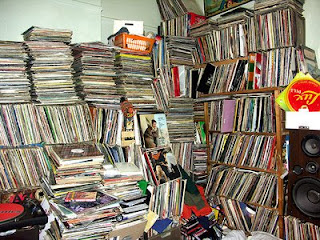 The good thing about having lots of records, is that every so often you will stumble upon a record deep in the racks that you forgot you even owned. It happens to me regularly, usually when I have the time to drop an LP, and leisurely peruse my racks (right now I got a Polish funk LP rocking in the background) I will spot something I may have forgotten about. Plus me being a fairly orderly person, I like my wax to be in the right place when I need it. I don't like to see piles of wax on the floor (like in the photo above) or records out of sleeves either. So shortly after buying stuff, I tend to clean them and rack them so I know it won't get lost or misplaced. Plus they're at arm's reach when I need them, but because of this habit I can sometimes forget what I have bought recently - hence a few remain there without being re-discovered until months or even years later. It's nice though when it happens.
But having lots of records also brings it downfalls. Here's a few obvious and some not so obvious...

NO ROOM - If it weren't for the Expedit shelving units from IKEA my place would just be a sea of records. It's amazing how racking them can free up your space (until you buy even more records and then have the same problem once again)

NO RENT MONEY - "Man, the bills can wait this month. So much you want for that promo only rarity?"

COMPULSIVE BUYING - You own a group's first 3 releases, so then feel compelled to track down their others, the LP and then all the promo 12"s and so on.

SUNKEN FLOORBOARDS - I currently live in a first floor flat, but if I buy any more records it may become the ground floor!

SLEEVE ODOUR - Due to the fact that old records are often stored in damp environments, hoarding second hand vinyl doesn't do a lot of good for the freshness of your home. Sometimes I come home to be greeted with a smell that I can only liken to the smell of my old school library. I guess it's all the damp and dusty paper sleeves. I don't mind the smell in small doses, but that's different to living with it.

MOVING HOUSE - Forget about it! A major muscle / transport / safety nightmare will only ensue.

PEOPLE GIVE YOU MORE RECORDS - I don't know why, but when
people know that you own lots of records, they always come to you saying

"hey, my friend gave me some records that you can have" and then I'm confronted with two smelly old boxes of scratched 45rpm singles from the 80's pop scene. Do they honestly think that I collect ANY old records just for the sake of it? I'm not a vinyl graveyard! Then I have to politely explain that actually, I'm quite particular about what genre of records I care to own.

COLLECTION SIZE - Like any other testosterone filled male, once you have realised the size is getting big, you begin to thrive on it and do your best to stimulate more growth.

CATALOGUING NIGHTMARES - Keeping a track of what records you do own and don't own can become misty at times. It may sound like vagueness to others, but if your crates do run deep, then sometimes it takes time to locate stuff. In the past I have tried to keep a paper list, but within a week or two it was outdated. So what was the use of that?


But there are plenty more positives to be experienced than negatives. The joy of being able to lay my hands on this or that track from musical history has always been enough reward for me. To be able to play a friend, colleague, or fellow beatdigger any dope hip hop or funk track that I choose to. Forget bragging writes - that's for suckers. I always say that "it ain't what you got, it's HOW YOU ROCK IT!" anyway.
So given the choice, I wouldn't change a damn thing. I love my music and my obsessions whatever size the record collection gets to. It's part of who I am and I will gladly live amongst it, or on top of it if I have to.

Below is a soundclip of my lucky find in the racks for today. I love this LP but had forgotten entirely about how dope one of the joints was. I've added a clue in the link, but this time I'm giving no names.

KID DYNO
I'm reading: Stacks of Wax - good or bad?Tweet this! Posted by Daily Diggers at 20:40

True.True.True. Especially the thing about moving... it's become more and more difficult to persuade friends to help me move house as the years go by!
As for cataloging, everything's alphabetical and i STILL have trouble finding stuff sometimes.
A small price to pay...

Dom...I just spent the last two evenings filing everything into order after slacking off for a couple of months! Very painstaking but worthwhile now it's all back in place. Ain't nothing better than racks of neatly filed VINYL!!!

Did you ever work out who used that Melvin Van Peebles Superstition btw? I still haven't!

ha ha Fishly, that's why I have lived here for almost 15yrs straight. I need a small army to move this shit!
I have stuck with my chronological storage for hip hop, and break LPs in alphabetical. Normally I can lay my hands on stuff with ease, but 45s is a different matter. My 45 crates are expanding rapidly, so a storage solution for those is next.


Whats up Mr Krum, good to hear from you man. I know your racks must be bulging, but organised real nice.
I listened to the MVP version of "superstition". That intro bass loop is real nice, but I can't tell you who used it. Keep trying to find out my man ;o)

We need to see some pics of your wax stash fellas!

Definitely a new one on me dyno??..ive never heard that track before. I Always love to hear 'up hill..'used for a back beat in an old rap record.Def one of the greatest drum breaks ever.

I think moving your records to a new home is like the equivalent to a hard days graft on a building site or hand balling sacks of spuds into the back of a lorry..allday..i cant decide what's worse.P

know exactly where you're coming from dyno, had some right shit given to me over the years, but also got some killer stuff too, mainly my step-moms 60's & 70's soul collection.

great track from a great lp btw, got that one tucked in the racks myself, the melle track is a belter too.

YO YOU CALLED IT OUT RIGHT THERE!!! how are cats thinkin i want the house remix of a devo 45?!?!? classic post.