Another Mission - The Finds

Welcome to Drum Break Central!
It was a heavy mission yesterday, and even though I know all y'all beat diggers out there in cyberspace were fiending for the dope stuff, I just couldn't find enough energy to post 'em up for you last night. Plus I spent most of my night playing through the wax that I had bought. 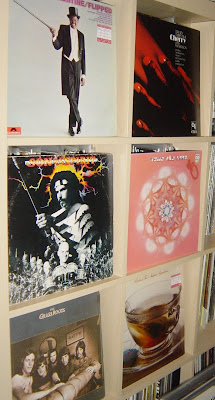 But best believe I had a nice record haul from only 4 spots - and all were bargain pieces too so I spent less than forty quid (50-60 bucks) in total on over fifteen records. Now that's the way to do it.
As per usual some of the haul was complete rubbish, and these records immediately got the frisbee treatment, as I like to call it. They're outta here already, but I still say you should always take a chance on some records if the price is right. Some of the best breaks I own are ones that I purchased by hunch alone, but of course it doesn't pay off 100 per cent of the time. Although having just said that, yesterday I got lucky. One record I bought was a pure hunch, but certainly sent my spidey sense tingling. I've added a soundclip below, but I'm gonna keep names and titles to myself on this one as it's gonna get the DYNO beat treatment at a later date. Not only is there a drum break at the start, but it also breaks down a second time after the guitar solo, and has some great chorus loops too (see if you can spot them!)

You like that? Well I got plenty more where that came from. The second track is by THIJS VAN LEER, best known for heading the Dutch prog rock group FOCUS. Once again we start with a sweet little headnod drum break ripe for the chopping on the SP or MPC, but it's the groovy bassline that makes this a playthrough track. It sounds very Stevie Wonder/Herbie Hancock-ish at times. VAN LEER plays Fender keyboard and his trademark flute, with other players including JAMES GADSON on drums, WILTON FENDER on bass, VICTOR FELDMAN on congas and percussion, and PAUL BUCKMASTER on arp Odyssey and Fender Keyboard Bass.

Hold on though, we are only just getting started. No mission is ever complete without copping an original breakbeat which we all know and love, and yesterday was no different. This time the classic break was "Sister Sanctified" from STANLEY TURRENTINE's "Cherry" album (see photo). I can't believe I hadn't already found a copy of this LP at a sensible price, but this UK press on Creed Taylor Records was a snip at only 8 pounds. That's a fair price to pay for a classic. We gotta wait four minutes for the drums to drop, so let's all enjoy this one ...

The list of players on this LP says it all - BOB JAMES, MILT JACKSON, BILLY COBHAM, RON CARTER and CORNELL DUPREE, and "Sister Sanctified" was arranged by none other than WELDON IRVINE. A classic "back in the day" break most notably sampled by BOOGIE DOWN PRODUCTIONS on "My Philosophy" to great effect, and also on ABOVE THE LAW's "Murder Rap" single. But listen out for the vibe hook as used by 3RD BASS on their "Soul In The Hole" track. DOPE STUFF!

Right, I have one more drum break to keep ya heads bobbin'! This time on a 45rpm seven inch single and by the legendary rock drummer COZY POWELL. The track is entitled "And Then There Was Skin" and features some manic drum skills from Cozy. Let's rock....

I think that's enough said for the moment about yesterday's haul, and we've only covered 4 of the fifteen records so far! In the photo you can also see another STANLEY TURRENTINE LP which has a dope MONEY BOSS PLAYERS sample on it, and a GRASSROOTS LP which I am convinced holds a hidden drum break somewhere within those grooves - but I'm damned if I can find it on my first listen through. Now it's time to give it a second spin on the turntables.

Kid Dyno
I'm reading: Another Mission - The FindsTweet this! Posted by Daily Diggers at 18:41

But what there lies in between that SPIRIT lp, Dyno?..have seen that one many a time, the cover makes it look samples o'plenty though i never bothered to snag a copy was i sleeping?.

thanks for sharing homeboy!!

yes it was a good day in the crates, that first clip had to be kept secret squirrel! ;O)

the SON of SPIRIT has a nice funky drum based track on it, I used it on the DAILY DIGGERS SOUND break mix.