My man PRITT KALSI has been hard at work again behind the camera, filming his new documentary about the beat digging culture "THE MEN AND THEIR MUSIC" featuring interviews with legends of the hip hop game like DJ PREMIER, MARLEY MARL, JAZZY JAY, C.J. MOORE and others. If you have seen KING OF THE BEATS 1 & 2 then you already know how PRITT does his thing - 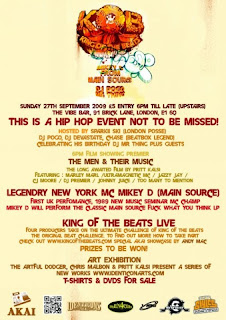 he gets close up and personal with some of the greatest beatmakers of all time, and unearths their secrets and a few stories from years of Hip Hop music.Plus as a special launch party, on SUNDAY 27th September at THE VIBE BAR, BRICK LANE in EAST LONDON, SPARKI SKI will be hosting a preview night with special appearance by MIKEY D, the 1989 NEW MUSIC SEMINAR MC CHAMP.

"I put holes in rappers who try to diss me,
and slap ugly girls who try to kiss me"
MIKEY D - "I Get Rough"

MIKEY is best known for taking the mic for MAIN SOURCE's second LP release "FUCK WHAT YOU THINK" on Wild Pitch Records, but is also well known for his releases as MIKEY D & THE LA POSSE. Tracks like "My Telephone" and "Bust a Rhyme Mike" are essential classics fromthe late 80's. So DON'T SLEEP and get over to THE VIBE BAR on Sunday night and join in the fun. DJ MR THING will also be rocking a special birthday set, so you know it's gonna be 100% the real deal. 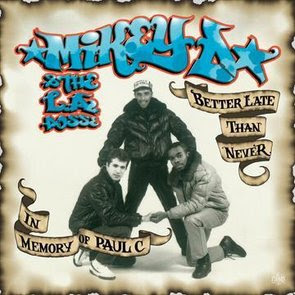 Myself and BEAT DETECTIVE will be in attendance, so come along and enjoy the film preview, watch MIKEY D (MIKEY DESTRUCTION) blow up the spot with his DJ JOHNNY JUICE, and meet some fellow beat diggers. Plus there's gonna be a live beat battle so you know the venue will be crammed full of talent.
So BIG PROPS to PRITT for making it happen again, and also to the man MIKEY D who is making his first ever trip to the UK. Word on the street from my man OXYGEN is that MIKEY tears the stage apart, so this one is definitely not to be missed.
Here's what MIKEY DESTRUCTION has to say....

hope to make this one, cos i cant remember the last proper jam i went to. Mikey D!?..WOW!..in the place to be. 'Bust A Rhyme Mike' 'My Telephone' from waay back, wicked MC!

Yall know Steve "Skye" Pickton, right? You are Dom?
My name is Haydn and Ive been looking out for him since I met him in Suffolk 10+ years ago. Ive helped him get his HipHop album together. Would be good to catch up with yall. Hopefully see you at King Of The Beats next Sunday.
DOPE DOPE blogspot!!!!!!!!
Peace
Haydn

Yo Supreme Dominion, I hope you can make it brohan.


Haydn - what's good! Great to see you up in here. Man I love the tracks you and Skye put together, amazing shit. I REALLY hope the LP gets to see the light of day, it would be a crime not to!

I have been meaning to talk to you and Steve about this for a while. It keeps me from sleeping.

I'll be there on Sunday Haydn, let's build!

thanks for getting in touch

I'll be there, I;ve been asked to participate in the King of Beats challenge, I'm hoping I can have your knack at finding some heat for £20 :) See you on Sunday...

Was a great evening, Mikey D was dope and met up with some sound peeps!

Jonny did a WHOLE RECORD with lyrics and all, which was dope...I hope you do something with that....