I like MANCHESTER - it's a colourful place, friendly people, and it definitely has a laid-back vibe going on that I enjoyed if only for a few hours. But I wasn't there to make friends or influence people, just to empty some record crates. The fact that many of the Manchester record shops are situated in the same district only adds to the appeal.
The best finds were in the VINYL EXCHANGE, a long established vinyl haunt, yet one which hasn't lost touch with the musical times. I wanna say a big "Thanks and What's Up" to MARK who works in there 2 days a week - a friendly face and some genuine banter always makes a record fiend feel welcome. I had some nice finds in VE, and I finally dug out the IKE & TINA TURNER track I had been hoping to find one day soon. Mainly for the superb drum break on "Cussin' & Crying", but also for the other funky cuts on this double LP... 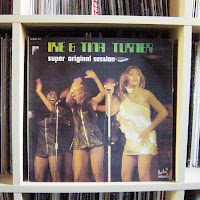 You will probably best know this killer drum break as the one a young BIGGY SMALLS rhymes over outside a BROOKLYN grocery store (I'm sure you know the video I mean). The drums on this are slow tempo but hard and chunky. When looped or chopped up they sound so fat and gritty, hence they have been sampled by a few Hip Hop artists over the years, including DAS EFX on "Here We Go" and LEADERS OF THE NEW SCHOOL on "Zone Coasters" (see video below). Despite this I haven't found a decent copy worth buying for years. I'm just glad to now own an original press, such is my obsession for the classic drum beats. But as an added bonus, the LP also has the track "Up Hard" - another killer drum break and b-boy classic.


And here's a video of BUSTA RHYMES, DINCO D, CUT MONITOR MILO and CHARLIE BROWN doing their thang over the "Cussin' & Cryin'" break.

THE NEW VAUDEVILLE BAND - "Winchester Cathedral" FONTANA RECORDS 1966
This kitsch 1966 LP was the brainchild of GEOFF STEPHENS, the man who discovered DONOVAN. Here he attempts to bring together other musicians in order to re-create the 1930's Vaudeville sound. 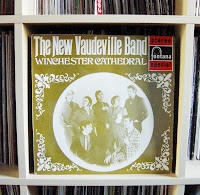 I'm not sure there was much call for it even back then in 66, and this LP has been relegated to the bargain bins ever since. But it does hold one loop on the track "Whispering" that you will all no doubt recognise, and even if you pick up the LP and browse it, you may even miss the loop entirely.
This wasn't expensive at £3.00 ... but to be honest this should really be a £1.00 LP all day - so keep checking those bargain bins! Let's just say it will make you go NUTS and wanna TURN IT OUT... 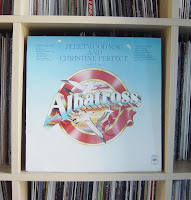 I'm sure there is an industry name for these type of LPs. All tracks on both sides of the vinyl are produced by MIKE VERNON.
But without doubt it is the track "And That's Saying A Lot" that stands out by a mile here. As featured on the DUSTY FINGERS compilations (what's up to DANNY DAN THE BEATMAN!), this downtempo moody joint is drum driven and has a funky little open break at the intro. Mellow key chords and funky guitar licks push the song along with CHRISTINE's seductive vocals caressing the beat. Dope shit.


FLASH FEARLESS versus THE ZORG WOMEN Pts 5&6 CHRYSALIS RECORDS 1975
"What the f__k is that LP" I hear you cry. BREAK DJ LEACY played me this LP back in the very early 1990's, and I think it is only the second or third time I have ever seen a copy, and with my obsession for original breakbeats from back in the day, how could I possibly NOT buy this LP? 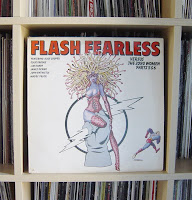 I could never remember the title (there must have been some good acid in the house when they chose that name!) but the dope artwork on the LP cover has stuck in my memory for years. This LP was a project involving JOHN ENTWISTLE and KEITH MOON from THE WHO, and also the likes of ELKIE BROOKS and ALICE COOPER. The concept being a comic book hero idea put to music. A concept album along the same lines as THE BEATLES' "SGT PEPPERS LONELY HEART CLUB BAND" LP ... but without the quality or the same level of success.
But it is the JIM DANDY track we are concerned with here. (JIM DANDY was a member of BLACK OAK ARKANSAS, a rock group who also sneaked in a few drum breaks onto their LPs so check 'em out). "Country Cookin'" is a bonafide b-boy classic, and the track name alone should give you enough clues. You will know this for sure, even if you don't recognise the LP or the names. Punchy drums and a sassy harmonica riff makes you wanna get down and break!


So thanks to MANCHESTER for the dope vinyl. I'll be back for more for sure.

NOTE to FISHLY; Damn man, I only got your previous comment on my return from your neck of the woods. Now I NEED to go back and hit those other spots, so maybe we should meet up, dig for victory and then catch an pint??
I'm reading: Manchester Diggin' pt2Tweet this! Posted by Daily Diggers at 09:22

Looks like you had a good day...did you check out Beatin' Rhythm? 45's for days!
Sounds like a good haul today my man...Yes, you need to make a return visit, as the aforementioned shops are sensibly priced and very rarely disappoint in terms of beats and breaks... in King Bee today i found copies of Grant Green - Ain't It Funky Now (blue note 7"), Tony Gregory - Gimme Gimme (chess 7"), Chakachas - Jungle Fever (polydor 7"), Booker T & The MG's - Melting Pot (stax 7") alongside a few other (secret squirrel!!) interesting singles & LP's.
Give me a shout next time you're north of Watford Gap!

that split Christine Perfect / Fleetewood Mac lp is a toofer, as in two for one...

That New Vaudeville Band break is crazy! I definitely wouldn't have listened through it to find that! I must have passed the album a hundred times before - have to pick it up next time. Thanks for the heads up.

I only recently bought the Christine Perfect / Fleetwood Mac LP too. Alan from Across The Tracks put me up on it at the bootsale a few weeks ago. There is an original pressing of the individual album on Blue Horizon but it goes for LOOT - check Popsike!