I hope you all had a very merry Christmas and Santa left you something dope under the tree! It is supposedly the festive season over here in London, but most people are just going nuts right now for the Christmas and New Year sales. All that queueing, pushing and shoving certainly doesn't look like "christmas spirit" to me. Today I spent the afternoon in the city and there were spending frenzies wherever I looked. Me - I wasn't about to deal with that frantic shit, I was simply making my way through the capital's vinyl haunts in search of my own bargains of the vinyl kind...
The Christmas break and a serious water infection (damn painful) have kept me out the crates for a couple of weeks now, and I was certainly feeling the withdrawal symptoms. At that rate I would have to change our name to the WEEKLY DIGGERS, but it just doesn't have the same ring to it does it? I cannot lie, I did still receive some records through the post from my usual international sources, but it ain't the same as plugging in the mp3, rocking a heavy duty mixtape, and heading off on a mission to the charity stores and vinyl emporiums of London town. Oh, and I gotta say it was good to bump into the legend that is HAMEED SUPA LARGE, AKA the mighty FRESH. Anyone who digs for hip hop beats knows the man that is FRESH. Big props to you my man and a very happy new year to you! I hope you find some rare shit on your travels.

Right here we go with a few of today's vinyl picks. All of these records were less than a tenner; no serious bargains but hey it's all about the quality of the music.


OSIBISA - Happy Children LP 1973 WARNER BROTHER RECORDS
I love the track "FIRE" from this LP. An absolute killer dancefloor record if you wanna encourage some b-boy moves or uprock. 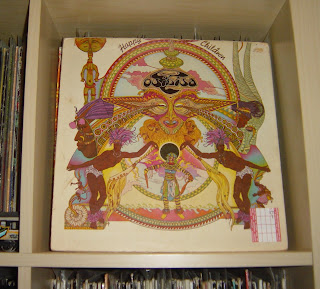 No doubt you will be familiar with it even if you don't own a copy. Most of OSIBISA's music is percussion heavy, with afro rhythms and a real upbeat feel about it. The track "Fire" is provocative to say the least, maybe this is why it is a b-boy favourite. I have a few OSIBISA albums and all of them are great listening if you are into funky afro rock. Plus there is great artwork on nearly all of their LPs so they are eyecatching to say the least. Shame on you if you leave one when next out rummaging in the crates.
OSIBISA - "Fire"

SLY & THE FAMILY STONE "Sing a Simple Song" 45rpm EPIC RECORDS
OK, so this one is damned obvious, but I defy you to find a heavier break loop than the one on this early 70's gem. 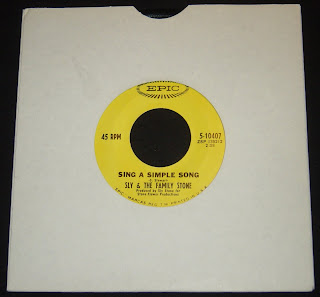 I remember loving this track before I even knew what it was. It has been used and abused by many hip hop artists, and tracks from other genres also, but I never tire of hearing it. For me the best use of the loop was by WITCHDOCTOR and the DOMINATING THREE M.C.s use of the loop on "Takin' No Shorts" as featured in our post HERE.
Once again I make no excuses for playing this record, I already had a (burnt out) 7" version on UK, so it was time to mint up. Today I managed to find one a US copy for £6 in great condition. Thanks to TONY at M.V.E. in Notting Hill for this copy, and for some of the other dope records he has sorted me out with over the last year.
SLY STONE - "Sing a Simple Song"

FRIERSON BROS. - "Gotham City" 12" 1997 HMC RECORDS
This one is an underground record which deserves more props than it gets. In fact I would go as far as to say this joint is a classic. Have a listen and feel free to disagree with me if you think I'm trippin'. I'm a sucker for a funky loop and no frills, and this describes this beat perfectly. 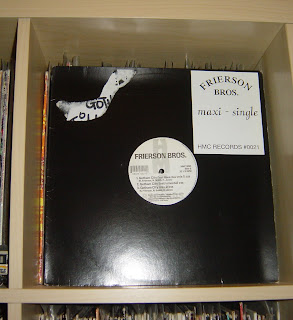 The producers amongst you may think it is too basic for a beat, but if it ain't broke don't fix it I always say. No amount of chops or speeded up soul vocals are gonna disguise a wack beat. When it comes to crispy home-made beats here at the DAILY DIGGERS HQ, I have very much the same ideals. Loop it, flip it, rock it.
Anyway, I digress. Back to the joint in question. Some of the astute readers will realise that this joint is by none other than Harvey L Frierson and his brother Richard "Younglord" Frierson. Yep, the same guys who were involved with SPORT G & MASTERMIND's dope releases "Live" and "Louder" on STREETWALK records. And also 360 DEGREES "Pelon" - the bronx banger that lay undiscovered for over ten years until a certain DJ IVORY mix. Oooooowweeeee!
This is an odd release in the fact that it has a house music a-side, but pure butter on the flip. I was speaking only recently to my man RareDave from DWG about this record, and then one pops up. Maybe I should do this more often. It also has a dope remix of "Gotham City".
FRIERSON BROS - "Gotham City"

SPOONIE GEE - "New Love Rap" 12" ENJOY RECORDS 1980
A great find for a mere three pounds (six dollars). I think a few of today's emcees could learn a thing or two from the emcee SPOONIE SPOON. Just check him out doing his thing on the 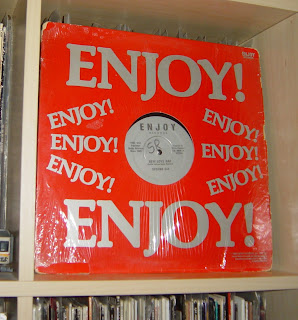 mic back in 1985 with a follow up to his 1978 hit "Love Rap", again on ENJOY RECORDS (owned by his uncle the legendary soul producer Bobby Robinson). He sounds smooth as butter and flows like water. Don't sleep on SPOONIE GEE. This 1985version starts with what sounds like live drums, and funky they are too. Great for old school hip hoppers and b-boys too.
I'm one to buy any old school joints I find while on a mission, including some of the disco rap 12"s which seem to be left untouched by many hip hop collectors. I understand that these records were critiscised as not being representative of real hip hop music from the park jam days, but they still form the archive of rap records history. And when I say old school, let's not get it twisted or upset anyone here. I know a few people have debated what IS regarded as the old school as far as hip hop is concerned. Let me just tell you it ain't the likes of ERIC B & RAKIM, EPMD etc.. like I see sometimes. Damn ignorance. Tell 'em SPOONIE....
SPOONIE GEE - "New Love Rap"

Love that Frierson Bros 12" Dom...never heard it before. Have to find myself one of those.

'Fresh'!!! Got some dope records off him during the mid '90s. Used to bump in to him all over London...Greenwich Market, Beanos, and of course, hanging outside the usual West End spots hustling Wax like a crack dealer!!! Top fella.

Word! That FRIERSON BROS "Gotham City" is dope. I've heard that beat before used by the 45 King here: http://www.youtube.com/watch?v=7u6k-YzUr9I
and that sample is Mack Rice's "Three People In Love" it use to be on youtube also but the person that uploaded in suspended but you can hear it in a mix here: http://soundcloud.com/beatpete its on BeatPete - Love...for the Music - Part 1.1 track 4.