As I mentioned previously, the vinyl pickings were fairly slim at the weekend, and the day's mission only uncovered half a dozen records worth purchasing. So this week I feel obliged to take a day off and head over to my reliable spots that always give up the goods. Although I must admit, on reflection and after reading your comments I realised that the records I had copped may have been small in numbers, but were sky high on quality. I guess I'm not easily pleased sometimes but that's not a bad thing.

So to continue from my last post, I gotta add on the only 2 hip hop records I picked up on last weekend's dig. Despite my initial disappointment, I have played both regularly through the week and they are both growing on me insanely. Hence I need to share....


MC LYTE - "Poor Georgie b/w Search 4 The Lyte" 1991 FIRST PRIORITY RECORDS
MC LYTE always "does it" for me, and she will always be my most favourite girl to grab a mic (say word!). So I was kinda 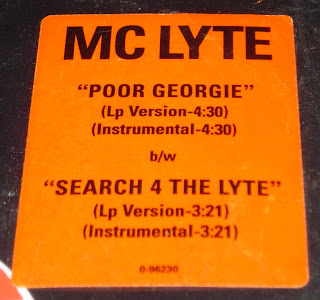 surprised when I spotted this
FIRST PRIORITY 12" in the bargain racks. I thought I had already scooped all of the FIRST PRIORITY records I wanted, so this one caught me off guard. But then on listening to "Poor Georgie" I can guess why I would have left this record behind back in the days. However the flipside is another ballgame entirely - LYTE at her most fiery. Just how I like her. Once again we have the KING OF CHILL on production, so the beats are guaranteed dope (he uses FUNK INC's "Kool's Back Again" drum break to great effect). Plus it's good to have a much louder pressing of this joint than the LP version which was kinda lack lustre.
MC LYTE - "Search 4 The Lyte"


TECHNICAL - "Stress" 1997? LIQUID RECORDS
Who? What? Where? Yeah I thought exactly the same things when my buddy AIDAN ORANGE first played me this mid-90s indie joint coming 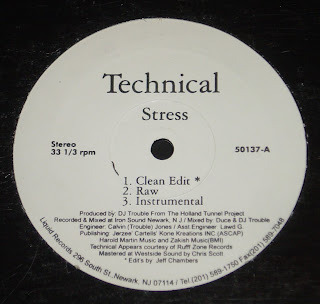 outta Brick City New Jersey. I had never heard of this crew, joint or label,
but on hearing the first few bars of "Stress" I realised that I needed this record. So to at last find one this weekend put a smile on my face, but even I had forgotten how bad this record was (bad meaning good). Since flipping it on my decks back at the HQ, I must have played it almost a dozen times. It is a simplistic joint production-wise, but the drums are so thick and heavy it makes your eardrums bleed and your teeth fall out when played loud. The lazy horns and relaxed rhyme patterns make for an indie winner. Get stuck in and have a listen....
TECHNICAL - "Stress"