This weekend's trip around the wax spots was not as fruitful as I had hoped for, but that's the way it goes sometimes. I would love to paint a picture of SALT "Hung Up" 45s in the bargain section for a pound each, but that would be telling a lie as big as the one MR KRUM's recently posted about the BOB JAMES "Mardi Gras" 12inch version wink wink LOL!! see here.

So I checked out some places I hadn't been in a while and found one great soul LP for a few quid, and a heavy drum break that needs sampling asap! But I saw lots of records I have already in my racks, and also a few that were too pricey for my budget. Without fear, I will be back out again next week and never giving those record crates a moment to relax. Me being ever optimistic, I always say this: for every disappointing trip I'm one step closer to that next big find! Here's some of this weeks small haul...

MFSB - "MFSB" LP 1973 PHILADELPHIA INTERNATIONAL RECORDS
I have been looking out for a US copy of this LP for a long time now, mainly for the seriously dope and b-boy friendly version of the classic track "Family Affair". Although for some reason it doesn't appear too often in the shelves and racks of London's record spots. Luckily this weekend I found a very sensibly priced copy stashed away in the soul section of 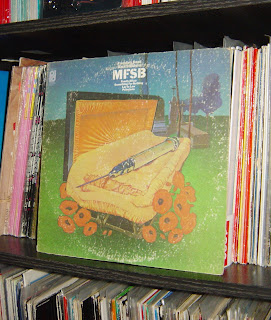 **ANONYMOUS** record shop in north London for less than a fiver (that's half a cockle in old money!). "Family Affair" is worth every one of those five pounds - the intro to this record is hard as nails, in fact I would even go as far as to say this version is edgy at times. And I could not resist editing the intro in a Louis Flores style to extend the break part. Being an instrumental version it can also be played from start to finish without having to interrupt. The drums are crispy throughout and that makes this track a serious dancefloor filler. Amongst the different versions I have heard of "Family Affair", this is by far my favourite of the lot. And once again this is another tune brought to my attention by my good friend BREAK DJ LEACY (how many times have I said that recently?). In terms of records, he was light years ahead of the game! I simply must drop a post about him real soon.
For now, tweak your tweeters and crank up your woofers and get down to the funky sound...
MFSB - "Family Affair" with break edit

THE 2ND CHAPTER OF ACTS - "With Footnotes" 1974 LP MYRRH RECORDS
WTF! I hear you cry. Has KID DYNO finally gone mad playing us Christian records with a religious message? Fear not beat fiends; have I ever let you down before when it comes to drums? Regularly I see LPs with nothing but an open drum break make crazy loot on auction sites such as eBay. The SHANGHAI LP is a perfect example of this, and always goes for around £30 simply because LORD FINESSE and BUCKWILD used it heavily in the 90s. However you can cope this 2ND CHAPTER OF ACTS LP in your local charity spot or even in the pound bin, and I would bet the drums are just as choppable. The producers out there feel free to grab the soundclip and chop that shit. 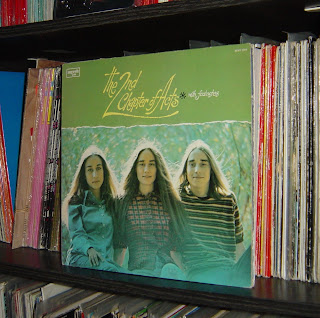 This record may have quotes from the Bible's New Testament on the rear of the cover, but it is the crazy kick and snare action deep within the grooves that gets me down on my knees. And please don't ask how I found out about this record, let's just say I'm always busy on Sundays.
The drum break itself features in the intro of the track entitled "The Devil's Lost Again", and is crunchy enough to be sucked straight into your SP1200 or MPC2000 and chopped up to perfection. Once again I have added a drum loop at the end of the soundclip for your listening pleasure. Imagine a few stabs or loops over the top and you're away....
THE 2ND CHAPTER OF ACTS - "The Devil's Lost Again"

BRIAN BENNETT - "Voyage" 1978 LP DJM RECORDS
The spacey cover on this LP sets you up nicely for the mood contained within the grooves, and although this album was released much later in the 1970s than I would prefer, it really was a good purchase. 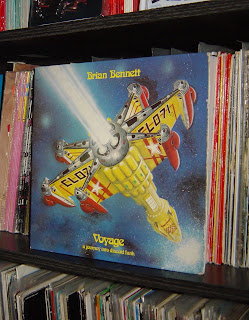 I bought it mainly for the one track "Solstice" that many of you will remember from its use by either NAS (on "Find Your Wealth") or maybe BLADE with LEWIS PARKER & MARK B on "Intense Preparations". Check out the BLADE video below. Solstice is downtempo yet deep, and takes you on a beat heavy trip into the starry cosmos on board the very craft pictured on the cover. Maybe not, but beautiful nonetheless.
Brian Bennett is best known for co-writing the 60s hit song "Summer Holiday" alongside Cliff Richard and The Shadows, but he also went on to win various awards for composing film and television soundtracks including for the likes of hit 70s police drama THE SWEENEY. Anyone who knows THE SWEENEY will be aware some of the background music was taken from Library LPs such as KPM (for whom BENNETT worked), BRUTON, and DE WOLFE. Dope shit indeedy.
BRIAN BENNETT - "Solstice"

Proper finds my friend. Looks like the weekend wasn't that bad after all.

You done good Dom...'Voyage' is a toughy to turn up and consistently goes for decent money on the bay which I'm sure you already know anyway. The MFSB album is dope too. Plus those drums on the Second Chapter Of Acts LP are heavy...I'd call that a good days diggin'!

I wouldn't be disappointed at all for hauling those three in a day. Especially that Brian Bennett joint! You've got all the ingredients for a dope tune right there, Voyage as the main loop, The Devil's Lost Again for drums and I'm sure you could use that Family Affair intro pitched down to make a decent bridge.

you know what, you guys are right. I should be happier with those weekend finds, but if I told you how many crates I had to rape to find that little lot you would understand where I'm coming from. I have a hitrate to maintain LOL!
I guess I'm used to a sack full of treats as opposed to a handful. This "vinyl bubble" I live in sometimes clouds my judgement.


Krum - if only that record truly existed. Biz has a lot to answer for...

Hey Downstroke you have an idea there brohan. I am off into the big smoke again today on a wax hunt, but when I return I'm gonna flip that Brian Bennett joint over the 2nd Chapter drums. Nice thinking man - please keep checking out the DAILY DIGGERS HQ for more beat insanity.

i was just listening to the mfsb post thinking about how much i'd like to have that break. it then occurred to me to check my own crates and voila! thanks for the reminder!