I hate to rip posts from other sites, but this RAMMELZEE video turned my head and made my ears prick up. I spotted it whilst lurking on the Diggers With Gratitude forum, so a big thanks to RUSS ROCKWELL 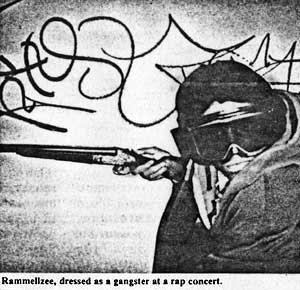 and SOUL SAFARI for bringing up the subject and sharing the video in the first place.
You all remember RAMMELZEE from the 1983 classic "BEAT BOP" on TARTOWN RECORDS (later picked up by PROFILE)? Despite none of his later releases achieving the same success as "Beat Bop", he is still involved with hip hop culture to this day. He can be somewhat "out there" though these days. Although, as SOUL SAFARI highlighted on DWG, he was a train writer in the 70s, an emcee in the 80s, and he worked with Jean Michel Basquiat as well as appearing in the film Wild Style. Plus he never fails to rock the MIC. That's a pedigree upbringing in hip hop terms. And he rocks the mic right in this clip here - RAMMELZEE live at THE RYTHYM LOUNGE in 1983.

I'm reading: RammelzeeTweet this! Posted by Daily Diggers at 18:56

Think Ramell is the George Clinton of Hip-Hop..

I musta watched this clip about 20 times already and there is something about his flow that hypnotises.

I can't FAULT this style!

Ramel's flow is so funky, Beat Bop is such an incredible record, never heard another like it.

Also always felt he was a big influence on B Real with his heavy nassle flow - "Like a B-Boy makin with the freak, freak".

R.I.P Rammelzee he can at last go back to the future!!