A sure sign that the recession must be over is when a rap record almost hits the $3000 (£2000) mark. I've seen several hip hop records fetch humongous price tags over the years (regulars include AKINYELE's "Break a Bitch Neck" Test Press, RAMELLZEE & K-ROB's "Beat Bop" OG on TARTOWN amongst others) 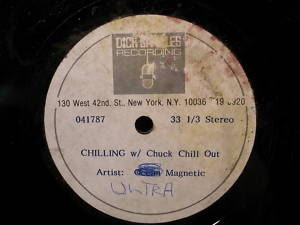 but this is in a new league of price paid to my knowledge. But, and it's a big but, this was a one-sided acetate of "Chilling with Chuck Chillout" by ULTRAMAGNETIC MC's - most probably a one-off record as this seems to be pressed up for CHUCK personally to play on his KISS FM radio show of the late 80s. Pressed at DICK CHARLES mastering. The chances of finding another one are as close to zero as you can get, and seeing as ULTRAMAGNETIC MCs are possibly one of the dopest hip hop crews to emerge from NYC in the late 80s, you can be sure this price is no "random" rap affiliated bid war nonsense. Ask any serious hip hopper from back in the day and they will tell you that CED GEE and KOOL KEITH brought some futuristic shit to our ears in the latter part of that decade. Along with MOE-LUV, T.R.LOVE and their connection with PAUL C, ULTRAS certainly lead the way for years and any exclusive joint by them on vinyl has indeed got to be considered a hop hop holy grail.

I'm reading: Serious LootTweet this! Posted by Daily Diggers at 20:06

Great post - wish I had one!! Or should I say the one! It certainly is one of the highest, though in Record Collector recently they looked at the most expensive prices paid and if my memory serves me right Uniques LP test pressing went for around £5000, followed by Akinele's Break A Bitch Neck for £3000 (highest price paid for it), MR Magic's LP for around £2000 and a couple of others. So Ultra certainly up there but not the most expensive. Dope post though.