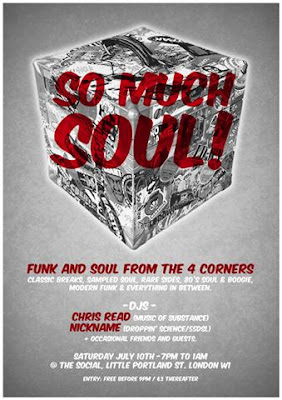 SO MUCH SOUL!
Funk and Soul from the 4 Corners...
Saturday 10th July 2010 @ The Social  with DJ Chris Read & DJ Nickname
Classic Breaks, Sampled Soul, Rare Sides, 80s Soul and Boogie, Modern Funk and everything in between.


On July 10th, THE SOCIAL in LONDON's Little Portland Street plays host to SO MUCH SOUL! - a new night brought to you by two of East London’s leading soulful scientists. Joining the dots between all things funk and soul, from forgotten gems to classics in the making, Music of Substance’s Chris Read and Droppin’ Science’s DJ Nickname will be playing soulful sides to drink and dance to.

Chris Read (Music Of Substance)
With over 20 years of record collecting and more than 15 behind the turntables, Chris Read is no stranger to The Social having guested at numerous nights at the venue over the years. For over 10 years Chris was responsible for one of the UK’s largest regular hip hop events. Having enjoyed a residency on BBC 1Xtra and performed at some of the UK’s most prestigious venues as part of a BBC New Urban Music award winning jazz outfit, Chris is best known in recent years for his steady output of remixes and mixtapes, downloaded in tens of thousands by a loyal online following.
www.musicofsubstance.com

Nickname (Droppin' Science/55DSL)
Nick is the man behind East London’s hugely popular Droppin’ Science and Dib Dab parties. Cutting his teeth (and records) with some of the finest DJs London has to offer, Nick has a keen ear for floor shaking funk and soul. With a radio show on Sensei FM alongside DMC Champs Matman and Daredevil, and regular guest spots across London, Nick is entertaining London’s more discerning listeners and dancers on a weekly basis.
www.djnickname.com

See you there!
I'm reading: So Much SoulTweet this! Posted by Daily Diggers at 12:03