One MC who really deserves more props than he currently gets is MC TRAGEDY; otherwise known as MC PERCY, INTELLIGENT HOODLUM, PERCY CHAPMAN, TRAGEDY KADAFI etc.. Not many rappers can claim to have enjoyed a career in rap spanning 25 years, and despite time away to serve jail sentences TRAGEDY's 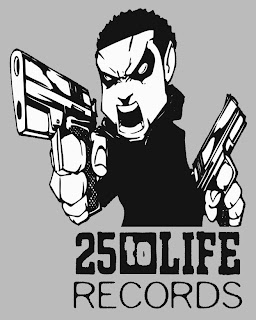 subsequent re-incarnations within the hip hop arena always prove to be a hit with the audience. From his original appearance on the SUPERKIDS "Go Queensbridge" 12" release, he has always repped his borough with pride, and is a well-known JUICE crew member. Yet when some hip hoppers discuss the greatest rappers of all time he rarely gets a mention.
TRAG has recently been released from prison after serving a term for conviction of "selling narcotics". One project soon to hit the market is DIGGERS WITH GRATITUDE's next vinyl release featuring unreleased TRAG material. I will let RARE DAVE of DWG spill the beans....

"Many of you will have heard the original versions of "Death Row" and "At Large" - well, the opportunity arose for us to get involved in a 25 To Life approved pressing of these tracks, plus the previously unheard demo of "Pump The Funk". These original versions were due to appear on Trag's unreleased/controversial 2nd album "Black Rage" (1992), but A&M Records got cold balls and decided to change the title to "Saga Of A Hoodlum"(1993) change the tracklist and remix some of the tracks (we have put the 3 previously available album 'remixes' on the flip). 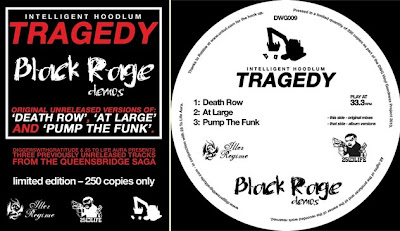 The "Black Rage Demos" are sought after (previously only available as crusty dubs from Westwood's Capital Rap Show) and production wise are closer to Trag's earlier work, the depressing original mix of "Death Row" is genius and the venomous production of the original "At Large" is nothing short of amazing - Trag holds no bars. The original "Pump The Funk" (this was originally named "Shit For Your System") is totally different to the final version with a stripped back beat for the jeeps.

Special thanks to Iller Regime Recordings for hooking up the audio (infamous QBC aficionado) and Robbie at www.unkut.com for putting us in contact with Trag.... hopefully one day the remaining lost album tracks will see the light of day, tracks like "Adolescents At War", "Black Rage" and the anti-cop "Bullet" are just too good to be lost in the A&M vaults!

Containing 3 previously unreleased Intelligent Hoodlum / Tragedy tracks (together with the 3 final album versions on the flipside) re-mastered for optimum audio quality. This release is in association with Iller Regime Recordings and is fully endorsed by 25 To Life, who will directly benefit Trag who is now (fresh outta Sing Sing) working on new projects to revitalise his career." RARE DAVE

Check out DIGGERS WITH GRATITUDE to order a copy.

Here's some vintage TRAGEDY from his MARLEY MARL days.