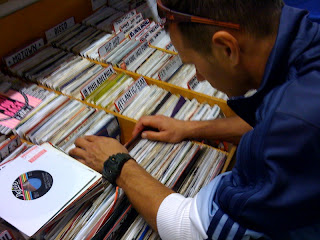 Double Dex for these impromptu diggin' photos of myself. To be honest I wasn't aware that he had taken any flicks until we had left the spot and were back on the tube and on our way to the next vinyl haunt. So focused is my concentration when I'm rifling through the crates, you could run past me naked and screaming and I still wouldn't notice you. In the past I've already been accused of "power diggin" by my digging buddies. Once at Kilburn Record Fair in London I was seen by several friends to be taking a 100mph dash through the record crates in search of long lost beats. It's not something I do consciously, but when there are crates in front of me I seem to kick into overdrive and my fingers start flicking involuntarily. 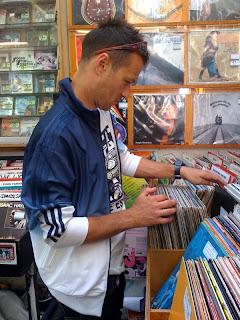 In fact, years ago when I would go record hunting with BEAT DETECTIVE and DJ SKYE we always had this kinda in-joke whereby we would park the car, lock it up and slowly amble towards the spot we were hitting whilst chatting about beats. But as we neared the shop the pace would quicken and eventually one of us would be forced to break into a run to the shop, in order to get there before the others and have first pick of which crate to hit. I forget at which record shop it happened first, but on every mission since that day the routine was the same and someone would break into a Usain Bolt type sprint. It got to the point where I was ready to run from the moment we hopped out the car. Great days! I don't let ANYTHING come between me and my records.
I'm reading: Kid Dyno In Deep ConcentrationTweet this! Posted by Daily Diggers at 07:40

Nice! Gotta be first to enter the store!

hoping that's not a ladies night 7" that you have racked up there!!
keep on rocking...

There's nothing I hate more than hitting up a record spot and your friend digs up a gem right next to you. That shit hurts!

That's why I fly solo these days Skeme!

Martin and Fish - that 45 was "Kools Back Again" by KOOL AND THE GANG. Although I must get doubles of "Ladies Night" LOL!!!

its all about developing that knack of checking what the dude next to you is flicking through at the same time as checking the crate at hand!

yes, yes Kid! check the technique, see if you can follow it.

I like the story about you dudes diggin together at the same spot,classic stilos that one.

Leads me to wonder what it must be like co-diggin with you lot at a car bootsale. Swift tactics to throw the natives and your buddy off the scent i bet, only leaving one to scrape the barrels out.

I cant help but envy the moves mate that spot looks proper rife for a few minutes worth of serious wax excavation. Niiice!

Where i be you'll find 'Ladies Night' ten times over, 'Kools Back Again'..no chance.

If Jim Reeves and Engelbert got beats i have them..LOL.