With a trillion hip hop related blogs on the net these days, it can be hard to find a site where the content can hold my attention and is consistent and meaningful to me as the reader. Hopefully we manage to maintain our quality control here at DAILY DIGGERS HQ and only bring you the freshest and the best.
Without doubt sites like UNKUT, KOOL SKOOL, MR KRUM's BIZARRE and HIP HOP BATTLEFIELD are amongst my favourites to check on the regular, but there are also a few new sites popping up with interesting content from all 4 corners of the globe. So I thought I would share with you some of the up and coming blogs that I have been checking lately....

ANTISOCIAL has been up and running for a few weeks only and chief contributor is BREAKS FOR DAYS regular FISH from PWS (you may recall we posted up about his excellent PAINTWASTERS graffiti website some time ago - some of the very best UK paint action). The idea was to 'throw up' all his non-graffiti related stuff that he doesn't post on the paintwasters site. For example this hilarious kids TV footage about rap music LOL.

There's a couple of old FISH mixes posted (FISH mixes are always dope go check these out), some graff flicks and some music related goings on. All interesting stuff, and my man FISH aka BALDEY O'HARE not only has over 100 aliases, but he also has a great sense of humour so don't expect him to be serious 100% of the time. As FISH himself says "... it's not as in depth as your site but...ah, fuck it...have a look!!" LMAO... check it out. 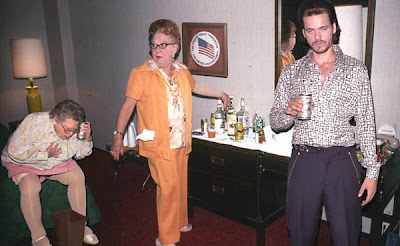 FUNKOVSKI's PARADISE is also new to cyberspace, but if his site banner is anything to go by then we are in for some serious fun and beat treats from crazy FUNKOVSKI. It seems Grandma can't take her beer! His site features some dope posts including LONDON POSSE, YELLOW MAGIC ORCHESTRA, movie soundtracks, a dope library funk download, lots of kung-fu flick action plus some of his very own dope beat concoctions (most of which are fresh). "Welcome to Funkovski's Paradise - funky flicks, mesmerising music and other fresh stuff."
Check out his "sometimes not so funny" beat below...
sometimes not so funny by Funkovski

Take a peep at these sites when you get a hot minute.