I just wanna say a massive happy birthday to my man my mellow DANNY DELTA who reached the ripe old age of 40 on Sunday 17th October. DANNY DELTA is one of the HEADSHELL crew who 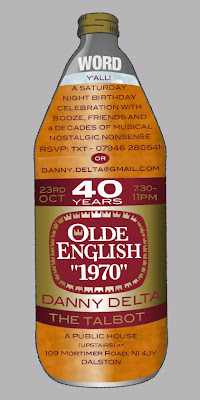 I first met up with at Spitalfields Record Fair back in 2000 ish. And the likely lad from Sheffield is one of the nicest dudes you could wanna meet on the DJ circuit in London.

In fact I spun at a few venues for him following our meeting, but now I consider him a very good friend. Recently he became a dad for the first time (congrats to him and Mags) and has taken a back seat in terms of spinning records lately. But I'm more than happy to say he is having a 40th bash in Dalston this coming weeekend, and I have the pleasure of dropping some nostalgic hip hop beats to help him remember his 40 years of rocking this planet.
Danny have a great day and here's to another 40 years of hip hop music. 3 cheers!
The party is invite only but I wanted to share the flyer with you just for kicks.
Here's one of DANNY's mixes from early 2000 - THE HEADSHELL MIX.


This also reminds me of my own 40th born day this coming March 2011, I feel a celebratory throwdown coming on....watch this space.