Now you all should know by now that I got a real soft spot for drum breaks recorded on the 45rpm format, or as I like to call 'em ... "45s". They're small and neat and they fit in your pocket (well not quite), and so much easier to carry home than LPs or 12"s. Hence sometimes I go out on "45s only" missions simply looking for a crispy nugget on 7" of plastic. 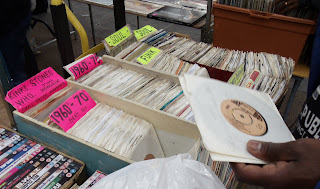 45rpm versions of some records can fetch ridiculously high prices, particularly in the funk and northern soul genres. Plenty of records are out there that are well over the £100 barrier, and I ain't even going there! But, and I'm not sure what other beatheads will say to this, I often find that 45s are actually easier to track down "in the field" than LPs of similar rarity. I'm often surprised by what little gems I can unearth in some of London Town's dusty record shops. My trusty portable record player is a must for 45s, as some can be battered and play terrible. Although I have found battered ones that still sound beautiful. It all depends on what substance they are pressed on. Shellac & styrene = shitty sound quality!

Let's dive into the Dynocrates and pull out some beats....

WARNING: these beats are not your average weak kick & snare affair. Adjust the treble and bass accordingly. And you might wanna hold on to your hat!


JAKE WADE - "Searching For Soul" MUTT RECORDS
WOW! These drums are HARD! In fact I defy you to find a crunchy drum loop that slaps your eardrums quite like this one. 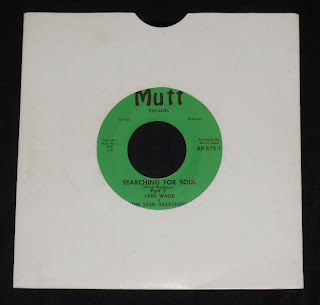 Perfect for sampling into your MPC/SP and chopping, or just left as a straight loop. Either way it's dope and if it ain't broke don't try and fix it I always say! I forget right now which mix features JAKE WADE but I'm sure someone will remind us. The record features part 1 on the A-side and part 2 on the flipside, with the added luxury of a breakdown on both. Can't say fairer than that.
I must be honest this record is not so easy to track down, and cost me more than I usually like to pay for any record. But I hit the spots hard and I know when I ain't gonna stumble upon a particular record in the bargain bin. Get real Dyno - open your wallet! (thanks to DJ Skye for hooking me up with this copy)

RIPPLE - "Willie Pass The Water" GRC RECORDS 1973
Now I'm a big RIPPLE fan so it's more than likely that I would buy ANY record by the group whilst I'm on a mission. 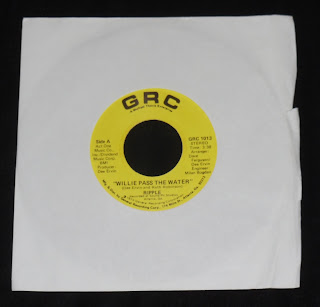 For example "A Funky Song" is an absolute scorcher of a tune, and superb for dropping at a b-boy throwdown. But today I'm gonna drop another RIPPLE 45 on GRC Records from 1973. This was an absolute steal at only a couple of pounds, and I've seen several copies since then and I regret not picking them up too.
The staccato drums on this are very "Zulu" and hence this is another dope track to play for a b-boy cypher. The wah wah guitars add to the flavour throughout, and the lyrics depict a day of working hard in the sunshine without the chance to quench with water - now that sounds like one of my record missions.

BENNY SHARP & THE SHARPIES - "Music (I Like It)" MIDAS RECORDS
Another record I have seen a few copies of lately. And they always seem to be minty fresh so I reckon some scrupulous digger 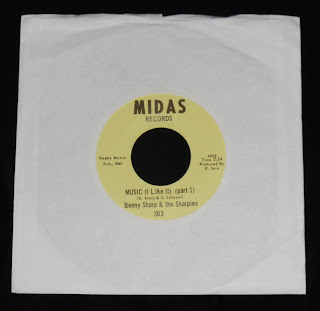 has unearthed a box of these little babies somewhere. If you know any more details please get in touch and let me know.
I know nothing about BENNY SHARP or his SHARPIES so I am all up for being educated on this record. The only thing I noted was that it was produced by OLIVER SAIN, and I know there are some dope SAIN records out there. Needless to say I copped this and wasn't disappointed by any means. In fact I bought 2 copies on the same day and unfortunately and accidentaly snapped one of them in two after a hectic doubles session.
The drums are most definitely ripe on this baby, and when looped up make for some real headnod material (try it for yourself). The moody horns in the intro set the scene for BENNY to do his thing, and as he tells us "I been singing this song a long long time, trying to get the message to you!"

Damn Dom...the drums on the first one are tuff!

I need some fresh 'Muff' in my life!

Haha! Just realised I misread the label as MUFF, instead of MUTT!

@ Krum you got muff on the mind mate (then again who hasn't).

Nice, nice ...been after that Jake Ward since I saw DJ Shortcut cuttin doubles a while ago.

All perfect selections for the Vinyl Veterans night.

Thanks for sharing Dyno.

One of my recent purchases was doubles of the Python Lee Jackson In a Broken Dream 45 which I'm sure you probably know. A quid each, yet the album goes for 30 / 40. Plus it's the only thing you'd want the album for. Rock collectors eh...

Loved that Jake Wade ever since I saw Shortkut cutting doubles of it on the Product Placement DVD. Killer stuff.