One For The Writers

I don't care when people say to me that graffiti culture is now bigger than hip hop, or they comment that on the fact that many writers these days have no interest in hip hop whatsoever. They may wanna separate the two artforms on every level, but the marriage of the two will always be fresher than any indie-kid's throw-up in my opinion. You cannot ignore that both had their upbringing on the tough New York streets during the 70s and 80s; they're both bastard children of the same ghetto. Maybe because I grew up with films like WILD STYLE and 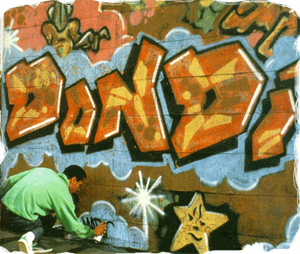 STYLE WARS I'm just brainwashed into thinking the two are connected so tightly. All I can tell you is that I get the same kick from listening to hip hop music as I do from seeing a burner on steel or concrete. Maybe my brain releases the same chemical endorphins for both graffiti and hip hop?
When I was growing up you were either a writer, an MC, a DJ or a B-Boy and most people attempted at least one (if not more) of the four elements to Hip Hop. I agree that graffiti took on a life of its own much later on in the 90s but you could never tell me that the two are separate. I just won't listen.
So hence I give props to those that understand the culture of Hip Hop and respect every element as part of its history. Plus I'm always pleased to be introduced to like minded people who LIVE the life and not just talk it. If you love Hip Hop then "doing" is second nature - this ain't no spectator sport!

One man who represents both corners is the UK's DR ZOOTS. Purveyor of paint and armed with lyrical ammunition he's ready to fight the hip hop cause. Along with his crew PWS (Paintwasters) he and producers DEEFLUX, JABS and LUCAS released an album entitled "THE OUTSIDER" in 2009 for free from Wordplay Magazine or Rarekind Records. If you weren't lucky enough to get a copy check the link...

Also, check out the graff inspired track UN1950 which will be up in the next couple of days. With some gritty drums and classic Style Wars samples this track hits the mark from the word go, and DR ZOOTS pulls no punches on the mic and he tells you how it is being an MC AND a writer - balaclavas, beats, waiting at stations for runners, making hits on steel. Beat produced by FISH from ANTISOCIAL MUSIC.

I'm reading: One For The WritersTweet this! Posted by Daily Diggers at 21:11