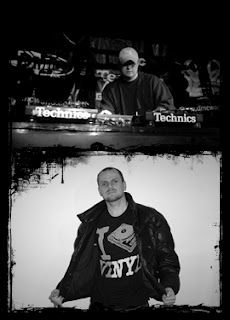 together a full length no holds barred mix for us folks here at BREAKS FOR DAYS BEATS FOR WEEKS and also to be featured on DISCO SCRATCH RADIO SHOW (check it out of you don't know already).
Now it's no surprise that these two hip hop fanatics have got together to work on a mix project as they're brothers from the same mother. JABBA is the man with the golden turntable touch (I think on the cuts he sounds like the UK's version of DJ REVOLUTION) and AGENT FINCH is the vinyl junkie responsible for the record choices up in the mix. You'll find it a top choice selection of hip hop anthems, classic breaks, golden era gems and other killer grooves - don't sleep, don't delay, grab yourself a listen today!

Super Bad choice of wax from my homeboy Agent Finch.........topped off with with the midas turntable touch of Mr Jabz = sweet sounds for a sunday afternoon!!!
Nice one fella's!!

Thanks for the dope mix.
Sadly, Mr Cratedigger is missing on the DWG board.