Whether you love him or hate him you cannot deny that the INHUMAN ORCHESTRA and most DIABOLICAL emcee on the mic BIZ MARKIE has firmly carved himself a unique position within the hip hop community. He first appeared as the man on the beatbox for a young ROXANNE SHANTE on her 1986 track "Def Fresh Crew" when both were under the wing of MARLEY MARL and signed to POP ART RECORDS in Philly. 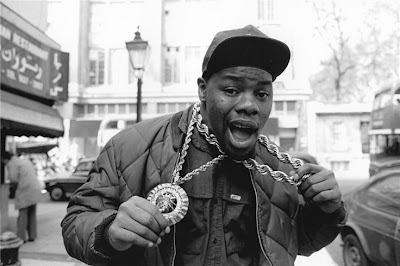 Although before that BIZ will happily tell you that he was the kid making "all the strange noises" at the jams and basement parties of the early to mid 80s. I'm talking pre COLD CHILLIN' days here.
SHANTE and MARKIE dueted again on the incredibly dope single "PAYBACK" a year later also on POP ART RECORDS which incidentally is one of the toughest sounding records from that period you will come across. BIZ by then had built up enough popularity to go it alone and release his own solo record which had taken firstly New York, the USA and then the rest of the world by storm on its release. By late 1987 you weren't down with hip hop if you didn't know who BIZ MARKIE was.
His goofy style of rap, off key vocals, comedic beatbox routines and silly antics truly make BIZ a one-of-a-kind hip hop personality that personally I could never get bored with. And the reason why, cuz BIZ still got skills despite playing the class clown. In fact some of the most memorable lines in hip hop are some of BIZ's own. Let me remind you ...

"All party people say isn't he something?"

"damn it feels good to see people up on it"

Born MARCEL HALL in 1965 and originally from Maryland, BIZ is also an avid sneaker collector and very serious record fiend (don't be fooled by his comedy manner). He is also notorious for telling stories over the years of a legendary BOB JAMES 12" version of

MARDI GRAS on CTI RECORDS recorded with just the drums and without the bells over the break. MP3s of this have surfaced all over the web as I'm sure you have already seen and heard, and BIZ himself plays the track out at parties and jams, but no-one as yet has provided physical evidence of the record. A holy grail of the breaks game or just another BIZ MARKIE leg pull? You decide.

BIZ is such a joker when it comes to buggin people out. Check out THE BIZ NEVER SLEEPS for some hilarious BIZ stories from people who know him. Here are a couple of extracts from the site by THES ONE (PUTS) and BIG CHAN.

Big Chan wrote:
Phone rings one day about 6 years ago. First time I ever talked to Biz on the phone:

I then start to list off every rare kung-fu movie in my collection that I can think of. After every title I mention, Biz replies "Got it!" He then says get to the rare stuff man! We start talking about all kinds of kung-fu movies for about and hour and a half. Biz then says, "Gotta go, I'll call you back."
Later that night I'm DUMB tired from work the day before and I'm sleeping early.
Wifey comes in a wakes me up, she's holding the cordless phone. She has a confused look on her face and says "someone named Biz is on the phone for you, he said that you told him to have me wake you up if he called back and you were sleeping. He sounds crazy, is everything ok?" I never told him to have her wake me up. Dude is always on some comedy like this!

ThesOne wrote:
Biz and I are shootin' the shit on the phone one day and his other line rings. he says hold on and clicks over. Then he comes back on and says "yo thes, you gotta be real real quiet when I click over again aight? don't say anything aight? just sit there and listen aight?" Then he clicks over again and now I'm on three way calling with him and some girl and he starts macking her up, but making little record jokes while he's doing it. I'm trying not to laugh but can't believe what I'm hearing. he's on the phone with her for like 45 minutes and convinces her to come through and "rub his back". Dude is the mack like that. She hangs up and he starts whilin' like See Thes?!! That's how you do it??!! Right there!
What a guy.

BIZ is himself no stranger to controversy - back in the early 90s a fairly low key track on his "I Need a Haircut" LP had used a sample from GILBERT O'SULLIVAN's song "Alone Again (Naturally)" although without the artist's permission or credit. The subsequent lawsuit GRAND UPRIGHT MUSIC vs. WARNER BROTHERS RECORDS became a landmark case which ultimately changed the way in which records could be sampled in hip hop music from that point on into the future. No longer was it possible to simply sample another person's music without first paying for "sample clearance", a fee which the record labels were not keen to pay. I hate to admit it, but that test case and others like it are partially the reason for the weak module-produced sounding rubbish beats churned out by the majors these days.
The sampling controversy certainly affected BIZ's recording career, and he even followed up the 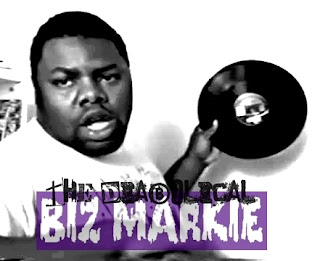 offending LP with the cheekily entitled "All Samples Cleared" LP in 1993. Unfortunately by then BIZ's sales and popularity as an artist had dwindled, although true-to-form hip hoppers would always have a soft spot for the diabolical one.
Nowadays you can still catch BIZ MARKIE busy dropping funk nuggets and disco gems at the park jams and big New York parties. In fact as far as deejaying is concerned BIZ MARKIE is never short of bookings and reportedly "gets all the big gigs!". His record knowledge is certainly second to none and no-one has the personality and ability to rock a crowd like he does. In BIZ's own words...

"I keep the people cheerin' because of what they hearing
Movin' and groovin' to a devastating sound that's glaring!"
from BIZ MARKIE - "Biz Is Goin' Off" 1988

And how can I sign off without a mention of the incredible alien conversation with WILL SMITH from the film "Men In Black" - pure comedy. As are BIZ's regular appearances on the cult kids TV show "YO GABBA GABBA" where he does his "beat of the day" for the little ones (and I know a few of us older dudes are regulars Gabba Gabba fans too!) Hell, you can even buy a BIZ MARK doll that beatboxes to you.

BIZ you are a legend. Straight up.

Here are a few of my favourite BIZ MARKIE moments...


Check out THIS footage of BIZ doing a beatbox live at SLED ISLAND in CALGARY. His stage rendition of "Biz Is Goin' Off" is some high standard delivery not many MCs can manage. Don't sleep on the BIZ!

Hilarious - BIZ unconvincingly tries to outdo KID CAPRI on the wheels of steel, and even changes the joint on him at one point just to fuck his flow up. And watch out for how BIZ walks away from the turntables as he passes back to Kid Capri - pure comedy. Go BIZ!!


BIZ and BIG DADDY KANE live for the camera


BIZ and SHANTE are the def fresh crew


And here's GILBERT O'SULLIVAN's take on the BIZ controversy...

Great post! We all know Biz, but few of us know Biz the collector. Alot of people think Biz lies about stuff he has but trust me when I say, Biz has it all! The Mardi Gras 12" without bells... Yes I've seen it. I haven't seen his copy but I have seen another well known diggers copy. Yes I've seen the CTI case that the record was also supposed to be a myth, once again it does exist. What people fail to realize is Biz was collecting things before is was fashionable to collect, he's been on the road and hitting shops of all sorts since the 80's. Biz is truly an unusual character and one of the greatest collectors that I know.