In Conversation with Slick Rick & D-Nice

"The Red Bull Music Academy pays tribute to hip hop, arguably the most influential youth culture of our time – right where it all began. Over the course of five days, five classic albums from five boroughs are revisited via workshops and public talks in each respective borough. At night, the artists re-create their seminal work for a special concert, bridging the gap from old to new school. The five albums are: ‘The Great Adventures Of Slick Rick’ (1988), Black Moon’s ‘Enta Da Stage’ (1993), ‘Enter The Wu-Tang (36 Chambers)’ (1993), ‘The Infamous’ by Mobb Deep (1995), and Dipset’s ‘Diplomatic Immunity’ (2003). Queens, Brooklyn, Bronx, Staten Island, Manhattan – stand up!" 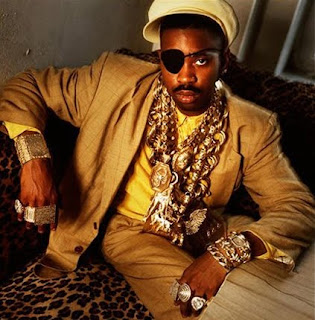 all New Yorkers as SLICK RICK and D-NICE hold audience at the MAKING OF "THE GREAT ADVENTURES OF SLICK RICK" to be held at the PARADISE THEATER along Grand Concourse in the BX. Doors open 4.30pm and the panel will discuss, and answer questions surrounding the making of the SLICK RICK classic album in 1988 as well as footage and photography from the time. If you are in New York then you need a very very good reason why you are not attending this event if you really do love hip hop music. There is even FREE ENTRY on the door.

And to make the night even more special than it is already, from 9pm SLICK RICK will performing live on stage (entrance will be $15). If only I could book a last-minute flight from here in London I would be there myself for this one!

Don't snooze on this historical event! Anyone who makes it on Tuesday please get back to us at DAILY DIGGERS HQ with the scoop, and maybe some video footage of the Rickster himself..??

Thanks
Kid Dyno
I'm reading: In Conversation with Slick Rick & D-NiceTweet this! Posted by Daily Diggers at 22:26