Keep 'em peeled next month as the new DJ FORMAT LP entitled "Statement of Intent" is due to drop. The LP features not only some of FORMAT's best productions to date, but also the accomplished rhyme skills of MCs like SURESHOT LA ROCK, PHILL MOST CHILL, MR LIF and EDAN. I have been lucky enough to have a sneak preview of the LP and I can tell you right now that some of these joints will have tingles running down your spine. For me tracks like EGO TRIP, REMEMBER, BEYOND DISCO and LIVE AT THE PLACE TO BE stick out like sore thumbs as my favourites after my first few listens. 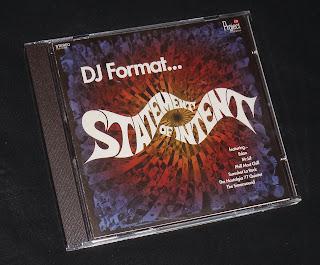 Although as this LP gets heavy rotation at the DAILY DIGGERS HQ I find myself becoming more entwined sonically with some of the other less obvious tracks. FORMAT's production skills on this LP are exemplary to say the least, and without trying to make a pun his sound is now very mature (his debut LP was entitled "Music for the Mature B-boy"). "Statement of Intent" is an audio amalgamation of the sort of beats, b-lines, horns, stabs, percussion etc. that FORMAT himself likes and plays as a music lover. On other tracks you can expect some low down dirty fuzz guitar and even some electric guitar riffs - so widespread are FORMAT's sample choices that it will have beatdiggers scratching their heads for some time. In other words, this LP musically represents FORMAT maybe more so than his debut album did. And his collaboration with SURESHOT LA ROCK on several tracks on this project was a marriage made in heaven - as a duo you certainly wouldn't want to be standing opposite these dudes ina battle! On the whole I really like it, and I think you will too. Take a sneak peak below at the promo video, then buy the album when he drops it!
I'm reading: New DJ Format AlbumTweet this! Posted by Daily Diggers at 19:19

Where you get that CD from Dom???

Yes yes this is not to be missed. Got the double vinyl here now and the pressing is super lovely.

Good work on the cover too Krum, crisp and clean!

I hope you enjoy it when it drops Fecam!