If you're a regular visitor to DAILY DIGGERS then you will no doubt know that I'm an absolute fiend for a crispy beat that revolves at 45 revolutions per minute. "Little" records always seem to be that much sweeter to find out in the digging field, although the condition of 45s can be anything from unplayed to completely battered; the latter being the more frequent. Hence I always try not to get too hyped up about finding a 7" record out on a mission until I've checked the playing condition. 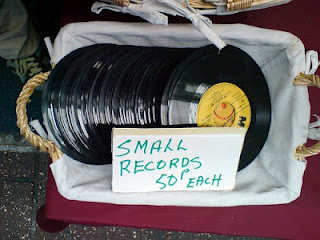 Record collectors - PLEASE take more care of your 45s! The sight of a pile of 45s without any sleeves protecting them whatsoever makes my skin crawl ad infinitum. That's where the portable turntable is worth it's weight in gold.
Hence I have unearthed a lotta dope 45s over the years but not bought them due to the state of the playing surface. If it means I have to wait and find three or four copies until I am satisfied then so be it. I know some people are happy with 45s as long as they don't jump or skip, but I don't want it to sound like someone's frying an egg in the background. Don't get me wrong, I love a bit of dust and static as it adds to the vintage music listening experience, but cue burn and crackles are a big NO in my book. As usual I have been hunting 'em down lately both around London town's record spots, and while trawling the usual internet sites for a bargain. Here's just a few of 45s I have copped lately with a crispy break of one kind or another...

STYLES OF BOBBY DAY - "Your Love" BYRDLAND RECORDS
Now I never expected to find this record while on a physical dig. I always expected that I would have to secure one of these little beauties on the internet whilst waving a large amount of cash in the air! But one weekend last year I got lucky at Olympia Record Fair in West London and found a copy just before I was going to leave the fair. Picture this, an undercover fair the size of a football pitch and covered with nothing but record and CD stalls plus the usual music paraphernalia. I had already been there rummaging through the various stalls for over 5 hours and had a bag full of quality stuff, but nothing amazing. 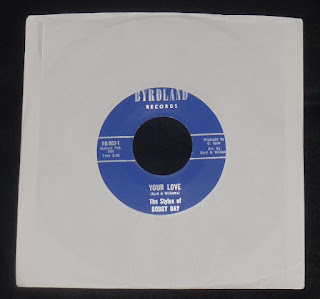 As the digging headache set in and my fellow beatdiggers were ready to call it a day, I stumbled into a stall run by an American couple and they had some great little boxes of funk 45s. While checking these out the stall holder offered a box of rarer items for my perusal, and this is where I discovered this BOBBY DAY joint. So why was I so damned eager to find this 45?? Just take a listen to the drum intro and this will answer your question.
This copy actually came from the man himself BOBBY DAY - the last of his remaining personal stash. This is one record that fetches mad loot on the web. And a quick shout out to SOUL SAFARI - the fact that you have this little gem made we want one more!


COALKITCHEN - "Keep On Pushing" FULL MOON RECORDS 1977
Now everyone will recognise the drum sample on this one even if the name COALKITCHEN means nothing to them. In fact people who have very little or no knowledge of hip hop or the breaks will still possibly recognise 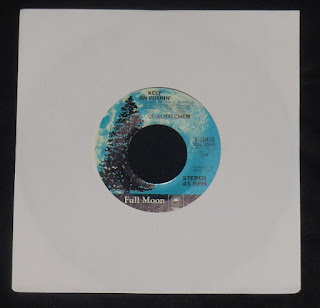 this catchy little break. Although I am not a fan of the "obvious" sampling use of this record, but I have a couple of old school tapes where this beat is doubled up for the emcees and that is what made me want it. Those cheeky horns that follow the drum intro are insane too (I think on the old school tape the DJ cuts this up including the horn part). I have been searching for the hard to find COALKITCHEN LP with this track on it but I have only ever seen one in a record shop and it was ridiculously priced. At the time I wasn't even aware of a pressing on 45rpm, which I would rather own anyway. And this copy right here is almost unplayed - just how I like them!


ROBERT PARKER - "Get Ta Steppin'" ISLAND RECORDS 1974
I forget when and where I bought this record, or where I heard about it first. In fact it may have been one of those off-the-cuff blind purchases so it wouldn't have cost me more than a couple of quid. 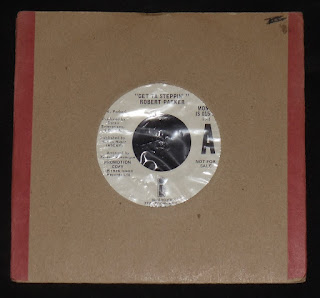 I have often spotted ROBERT PARKER 45s in the funk crates whilst out shopping, and as far as I know there is a nice LP by him entitled "Barefootin'" on NOLA RECORDS but I have yet to see one. The same track is on both sides with a mono version and stereo version on the flip. In this instance the mono version is much louder and the drums sound fatter in the mix. It's more of a funky loop than an all out drum break, but it's laid back and so funky like a tramps footwear. Check out the soundclip and if you like what you hear there are several cheap copies of this 45 on DISCOGS at present.


BUARI- "Karam Bani" RCA RECORDS 1975
Now this is some serious afro funk from BUARI, a singer, dancer, percussionist and composer from Ghana. 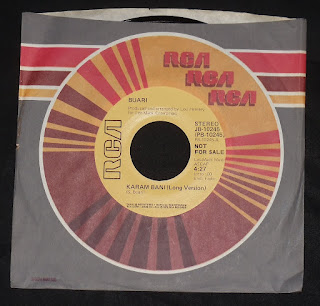 I can tell you very little about this man and his music, other than that this track "Karam Bani" was most notably used by CHIEF GROOVY LOO & THE CHOSEN TRIBE on their 1992 release "I Love New York" which happens to be one of my favourite 12" releases from that year. They only sampled the first half a bar or so - me personally I would have flipped the whole beat. If you know of any other hip hop tracks that sample this record please drop me a line and let me know.


LARRY CORRYEL - "Morning Sickness" VANGUARD RECORDS 1969
I have this track on LARRY CORRYEL's self titled album from 1969, but again this another instance where I didn't realise there 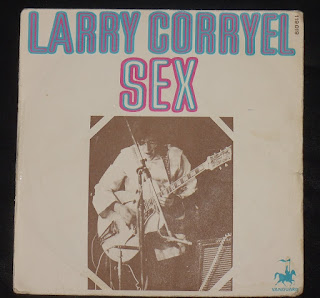 was a 45rpm version out there, admittedly this time it's only on a French pressing and it is hidden away as the b-side to "Sex". This joint is an absolute killer from start to finish as CORRYEL goes off on a mad jam session with some superb drums throughout. The little riff changes are suggestive and ever changing throughout whilst the drums continue to shuffle throughout whilst sometimes increasing in volume to emphasise the manic mood of this track. The legendary and hugely diabolical BIZ MARKIE flipped this CORRYEL joint on his "I Need a Haircut" LP, more specifically the track entitled "On and On". Dope shit!


Keep digging for those 45s!

I love hearing breaks that I was previously unaware of on this page so this section and the podcast/radio show thingy are generally my favourite sections and these recent few have failed to disappoint.

Thanks for the heads up on the Styles Of Bobby Day & Larry Coryell 7"s.

As for the old school tape of a dj doubling up that Coalkitchen joint, you wouldn't be talking about a certain Jazzy Jay and Afrika Bambaataa tape by any chance would you?!

Nice as ever KD ..I need a copy of the Styles Of Bobby Day 45 ..if you hear of one at a decent price give me a shout brother.

Leo, thanks man it's great to hear that. My 45 game is healthy so you can expect more break 45s in the near future. I can't put my finger on which old school tape, please help me out there bro...?

Yo Mac I will keep an eye open for a BOBBY DAY for ya. My pleasure.

Chinaski I will have a listen and get back to you - well spotted though bro.

Stu - I had been told that Bernard Purdie was the drummer for BUARI but I've yet to confirm it. The fact you mention it also leads me to believe that's the truth....nice one.

wow, the booby day is a nice find. found one copy once, but pretty beatup... and yes, bernard purdie played drums on the buari album. great post as always! mike

hey Mike, thanks for confirming the Pretty Purdie point.

And yo I hope you get lucky and find another Bobby Day in better condition. Record karma always kicks in!

Good to hear that the Bobby Day is floating everyones boat and is getting the attention that it deserves. Been sitting on this for a good few years now. There were a few copies out there from a certain someone- you just needed to know where to look! Im sure they musta dried up now though. Maybe Dom can shed some light on this..? Anyway, keep the dope finds coming.. Soul Safari

Yo SS thanks brother, indeed I was looking for this but when I realised you had a copy I knew I HAD to track one down. Nice to find it in the flesh too rather than on the web.