I don't expect all hip hoppers to be fully aware of all the breaks used in our music, but a healthy appreciation of the the funk is essential if you really want to understand what hip hop culture is all about (and when I say funk I mean all things funky not just the genre itself). However if you are an active b-boy or b-girl then you SHOULD definitely be aware of what joints you are actually getting down to on the floor to fully express your moves. But for the hip hop public as a whole, I'm happy that some people could not care less where this or that particular break originated from. Although I can tell you that there are also many people out there that simply cannot sleep until they identify a crusty drum break featured on an old school block party tape, or a sample from the latest dope hip hop track. This is no surprise to me, considering Hip Hop was conceived deep inside the grooves of two identical records being spun simultaneously by the pioneers in the Bronx. The birthplace of Hip Hop is no doubt New York City, but if you want to physically pinpoint it then you need to start looking in the crates. 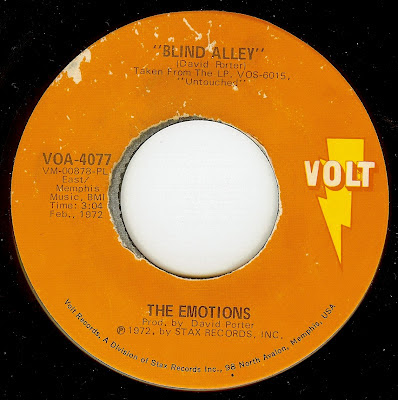 There are however a few breakbeats that become so famous that even people outside the hip hop community are aware of their relevance and importance. Such titles as "Funky Drummer" "Apache" "Amen Brother" and "Nautilus" will often get a reaction from more than just the hip hoppers amongst us. Another break record which over the years has transcended to this same level is "Blind Alley" by THE EMOTIONS, which to my knowledge was first used by MARLEY MARL and BIG DADDY KANE on the 1988 classic "Ain't No Half Steppin'". The first few bars of "Blind Alley" are so alluring and so damn funky that MARLEY was not the only one to flip the beat and it soon became a case of "OK who can use this beat the best!". What sticks in my mind is DJ BABU's infamous beat juggle routine using the track which still blows my mind every time I watch the video, but tracks like "Pink Cookies..." and "Sippin' Brandy" have got my immediate attention just by using THE EMOTIONS funkiest moment!
OLIVER WANG over at SOUL-SIDES has recently broken down some of the Blind Alley sampling joints of yesteryear in his article BREAKING DOWN BLIND ALLEY. SOUL-SIDES are also currently running a competition for producers to chop up BLIND ALLEY and submit their resulting beats which will be shared on SOUL-SIDES and rated by the readers.

And what do you know - WANG even gives my very own AIN'T NO HALF STEPPIN' DAILY DIGGERS REMIX a little shine in his article too. Thanks to WANG and to SOUL-SIDES.

I'm reading: Breaking Down Blind AlleyTweet this! Posted by Daily Diggers at 11:45