Being a beatdigger and the record obsessed individual that I am, it seems that I am at a stage in my life now where 95 per cent of my total friends are either deejays, record collectors or hip hop enthusiasts. Shallow or selective? I will let you decide. That's just the way my life has panned out (see I'm even using stereo metaphors!). Either that or it's the fact that the other people I meet in life can't bear to be near a rap obsessed 40 something year old. Perhaps I am a Hip Hop Bore!
One day whilst at work a few years back I had a chance meeting with someone who told me he was a drum & bass DJ/producer who used to be into Hip Hop back in the 80s (when shit was truly fresh and hip hop was slowly filtering across the UK). 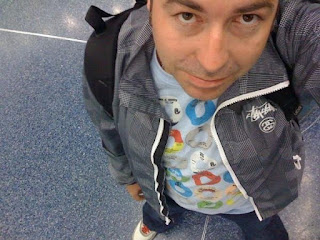 Obviously this dude and I had lots of points in common and we struck up a friendship. It was only a few weeks later I found out that he was actually drum & bass legend DJ A SIDES. Being a hip hop purist that rarely ventures off genre I have to be honest I wasn't aware of his reputation and standing within the DNB community. But you only have to Google the name DJ A-SIDES and you will see how busy this man is, in fact he has only just returned to the UK following a world tour. Yes I did say "world tour" - it doesn't get much bigger than that I guess. But every so often he takes time out to catch up on hip hop and has never got outta touch with what's fresh and what's wack. He even came with me one day to meet JAZZY JAY when the Bronx legend was doing a showcase at our local DJ store in East London.

So to cut a long story short, if you're into records and hip hop beats then the chances are we will get on like a house on fire. If not, then I apologise in advance cuz you're probably gonna be bored to tears. So to sign off, here's my good friend and DRUM & BASS stalwart DJ A-SIDES cutting and mixing some heavy electro and early rap joints for the Old School crew. Somebody say "hell yeah!"

A Sides Mastermix 1 by Asides on Mixcloud

I'm reading: DJ A SidesTweet this! Posted by Daily Diggers at 20:07