I've never before mentioned ACTION BRONSON on this site, but then again do I really need to? Unless you have been living under a rock for the last two years you will already know how dope this big man is when he is clutching the microphone. And I'm sure he doesn't need any additional hype from me (although in my opinion he deserves all the hype surrounding him).

I just copped the super limited PURIST 45rpm single feat BRONSON and fellow wordsmith ROC MARCIANO on the flip. Design by my fellow Vinyl Veteran MR KRUM from COLD ROCK STUFF. I said COLD ROCK STUFF - listen close now cuz that's a name you're gonna be hearing a lot in the very near future...watch this space. 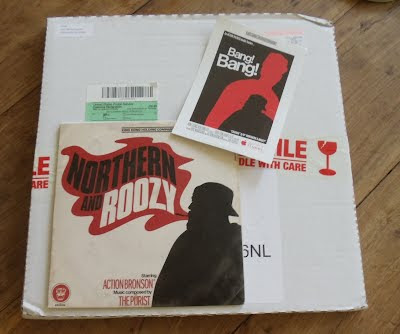