Another Dose of 45s

Here's ANOTHER DOSE OF 45s - it's kinda self explanatory really, but rather than my usual mix of funk classics and b-boy breaks, this time I have compiled an hour selection of dope Hip Hop 45s past and present. I know Hip Hop music was primarily released on the 12" format throughout the 1980s, but I have always collected as many hip hop 45rpm seven inch singles as I could get my hands on. Many 45s were promotional only releases from the 80s and 90s and were manufactured purely as a promo tool rather than to increase record sales. I've included a few promo only 7s in this selection together with a couple of recent and very essential 45rpm releases. Ain't nuthin' to it but to get into it... 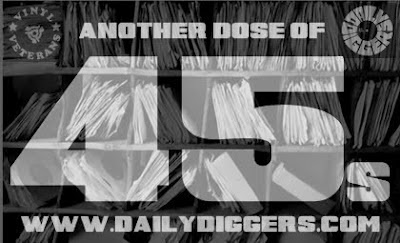 "Did somebody page Quinton??"

I'm reading: Another Dose of 45sTweet this! Posted by Daily Diggers at 22:47

sure JayTee you can DL on this link right here...

Don't forget to page Quinton before you listen ;o)