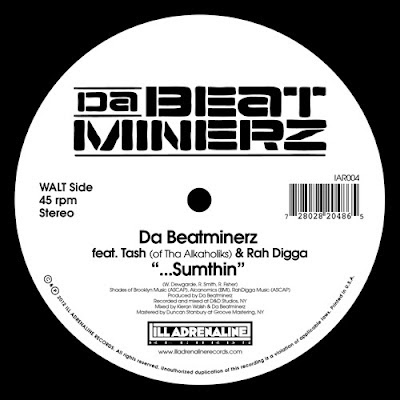 Both joints are unreleased, the A-side was recorded in '98 and hast that classic BEATMINERZ production. MR WALT and EVIL DEE then were hired to remix "Another World" in '98 (originally produced by UK crew THE CREATORS), but this remix didn't make it onto any release. Check out the soundclips HERE...

I love the fact that lots of independent hip hop labels are releasing 45rpm 7" singles as opposed to the usual hip hop format of the twelve inch. I'm a sucker for little records but I know a lot of hip hop collectors who don't like them. How can you not like funky little records with boom bap beats?? Yo get over the size issue and scoop these up before they are long gone. Size is NOT important unless you're trying to impress the girls yaknowhatimsayin'?
Pre-orders for this release will go live July 30th (release date: August 21st) directly on the ILL ADRENALINE website. Pressing run is 500 (400 black vinyl copies, 100 transparent blue). The colour vinyl will be sold exclusively on the website.

I'm reading: Beatminerz UnreleasedTweet this! Posted by Daily Diggers at 12:43