Return Of The Chill One

On August 17th 2012 a new song drops that I know is gonna make a few mouths drop, make die-hard hip hoppers noddingly approve, and make serious rap collectors bust a nut in their shorts. And the reason why this joint is gonna do all of that is because this, my friends, is the RETURN OF THE CHILL ONE.

Now here on planet rock we have MC CHILL, DJ CHILLY D, KING OF CHILL, CHILL WILL and also GROOVE B CHILL. I have records by all those dudes. BUT that ain't who I am referring to here, and none of those listed can actually lay claim to being THE CHILL ONE. Only one man can hold that title - a title given to him for the way he effortlessly rocks a microphone and rides a dope beat. I am of course referring to the legend that is CHILL ROB G.

So in four days time you need to stop what you're doing, get yourself in front of your PC with trigger finger at the ready and wait for the bomb to drop. Oh, and did I mention already that the production on this track called "Excitement" has been handled by DITC beatsmith DIAMOND D? An apt title don't you agree? I'm sure you know already how much a fan of BIG DIME we are here at DAILY DIGGERS HQ. Isn't everyone?

Well, it goes without saying that we're also die hard CHILL ROB G fans too, so it made perfect sense to catch up with ROB himself to find out what he's been up to, and to throw some questions at the ORIGINAL FLAVOR UNIT member.

Let's quit the yappin' and start the rappin'.... 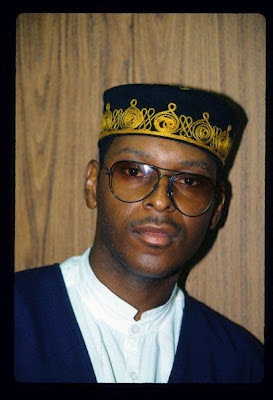 KID DYNO: Please could you fill us in with details of your new track with DIAMOND D, and tell me how you guys first hooked up on this project?

CHILL ROB G: I met Diamond through The 45 King, he always had some of the illest tracks so it was definitely something I wanted to do... I was just hyped he said yeah to be honest. Let me come right out and say this particular track (Excitement) might be new to the world but I've been sitting on it for some time now. I have a couple more unreleased joints that I've been baby sitting and their all going to finally see the light of day.

KID DYNO: It's been over 20 years since "Ride the Rhythm" dropped on WILD PITCH. Despite all the shady goings on with that label, how did it feel personally when your LP hit the street after the success of "Dope Rhymes" and "Court Is Now..."

CHILL ROB G: Felt great! After I left the studio the night we recorded "Court is in Session", I took a cd of it with me. I let 1 of my homeboys listen to it in his car cause he had 1 of the loudest systems of all time. He probably played the song 20 or 30 times. I kept sayin I had to go but homie was determined to ride around and blast that record over and over. Thats how I knew I had a hot 1. "Dope Rhymes" was cool but it was so much like having sex for the first time ya know what saying... I mean not like it was over too fast but I didn't have any experience with recording records before that so I was just trying not to suck. hahahaha.

KID DYNO: A couple of years ago I interviewed UK MC legend FRESHSKI, and we both agreed that your lyrical flow has always been nothing short of incredible. We both remarked (as do many others) how your rhymes sound so effortless on the mic.
Also, one of your lines on the track "Motivation" is .... "I'm blessed with the gift for rap".
Does "the art of rap" really come easy to you?

CHILL ROB G: Yes and no. I think anybody can rap, and when you listen to some of the stuff that's out right now it seems like anybody indeed is rapping. The question then becomes what makes me a superior rapper... cause I Am... and the answer for Chill Rob G is 2 things How much I care about what I'm saying, and how I deliver my lyrics. Way before I ever met the 45 King, I was having a conversation with this chick I dated in high schools father. We were talking about life and he said something like "a mans life should benefit people besides himself", and I don't know why that stuck but It did. so years later when I got a chance to speak to the world (at least that's what I thought I was doing from that little recording booth) I wanted to give... you know say something worthwhile. I also am a huge hip-hop fan so I knew hard heads would not be willing to listen to me if I just said my rhymes over the beat cause like I said anybody can do that, so i needed to make it as fun as possible to say. My lyrics that is. That way people will like to repeat my stuff cause its fun to say. That's how you get a "Ride the Rhythm" or a "Let the Words Flow".

KID DYNO: To also quote you from "Motivation", you refer to DJ MARK on that track as "remarkable". The pairing of you certainly remains one of the best pairings in hip hop history. I know you recorded the "Cat Jams" joints with Mark not too long ago, but can we (please) expect some more material from you guys like you hinted in your superb interview with Robbie from UNKUT.

CHILL ROB G: "Marks remarkable bass shakes the floorboards" was referencing the bass not Mark. Mark is just average. Hahahahaha ahhh man now that's all I need is for someone to take that little piece out of this whole interview. "Yo Chill Rob said Mark is average sun". hahaha Not for nothing I had no idea he was gonna release that CatJams stuff. When we recorded it he had this phone booth in his crib... still does... That he used as a sound booth back then. and I just went in there goofing off saying whatever, I mean no excuses I recorded the stuff but, If I was Mark I would not have put that out IJS. I talk to him all the time about doing another album. The 45 King is at a place where if he's going to work it needs to be an official project with EMI or Warner or "insert your favorite giant music conglomerate here", promoting it pushing it all that good junk but I still bug him about it anyway.

KID DYNO: How did the later deal come about with NJ label ECHO INTERNATIONAL after your brief hiatus? Some of the stuff on the BLACKGOLD album is highly slept on in terms of CHILL ROB material. 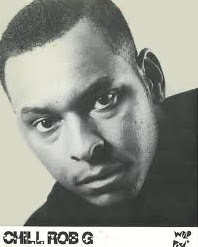 CHILL ROB G: Jeffrey Collins is the guy that Stu Fine (Owner of Wild Pitch Records) used as his first distributor. Jeff has been in this business longer than I have been alive, and that's saying something. I knew a guy Stormin Norm he's from Jersey City happened to be working with Jeff Storm looked me up and said we could make an album he sold me on the Idea we would have our own label and this guy Jeff who I had not met at the time would distribute our stuff under Dancefloor Dist. We started working things fell apart after about 5 songs or so the label thing never materialized but Jeff wanted to continue working with us separately. He introduced me to a couple of producers in Brooklyn close to where I had moved we used some of the stuff from the 1st project and added it with some new material and Bam "BlackGold".

KID DYNO: What's your personal favourite joint you have recorded so far? And are there any unreleased CHILL ROB joints hiding on a DAT tape somewhere still to see the light of day?

CHILL ROB G: I did some stuff with these guys out in the UK "Bankrupt Europeans" they know their hip-hop and a couple of those joints are crazy. I also got a Homie from Jersey City called Suge Light hahaha we did like 4 songs on our way to an album but once again things fell apart, can I mention The Roots are 1 of my favorite groups. 1 joint called Slow Down. you guys will hear that soon. but The dude I've been working with the last couple years Dayta 120 is sick with his. We got a lot of heat for ya... Last thing we did is called "I Am Not Surprised" I like it. Yeah man I got few things up my sleeve and behind my back.

KID DYNO: Does Hip Hop in 2012 still get your head nodding? Who else within Hip Hop would you want to record with and why?

CHILL ROB G: It does... I still listen to all my old favorites. I guess I'd record with anyone willing to risk it. Why not. Im not gonna not work with someone cause they suck, how are they ever gonna improve unless they get on a track with better MC, and people point out to them that they getting smoked on the record. Rappers are mad sensitive and most are very competitive that's another reason I care so much about what I sound like. so... But If want names I guess Id want to work with Wu-Tang or Will.I.Am or cause we bring such different elements to a record. I've been trying to get in the studio Naughty, Nikki D and Lakim since our homie Apache died maybe that 1 can still happen.

KID DYNO: What else can we expect from the CHILL ONE in the future? 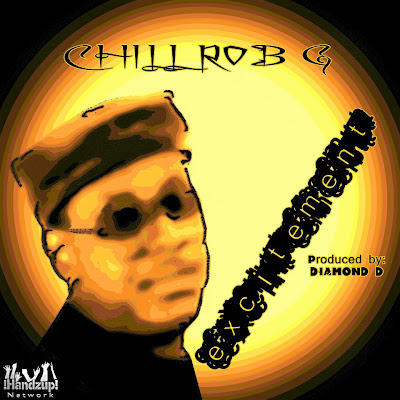 I'm reading: Return Of The Chill OneTweet this! Posted by Daily Diggers at 19:01

Oh man. The first time I read your blog and you have an interview with Chill Rob G!! He is #1 and I am forever in your debt! (Well at least a new reader...)

Gus, you are welcome my friend.

Anyone who recognises Chill Rob as one of the greats on the mic is alright with me.

Glad you found us, keep popping by I guarantee some fresh shit in the future.

Where is this happening Dyno?

it will be download only and is avail today. Get your search on and you will find it.

For one reason or another I'm not happy to post a soundclip on this site. Sorry about that, more details as to why in the near future.

DAILY DIGGERS has done a very nice job with the interviewing article of a Hip-Hop legend who happens to be the legendary CHILL ROB G!

Expect some exclusive yet classic material coming out very soon on !HANDZUP! NETWORK. If you don't know about !Handzup! then I would advise you to use your google noodle and look it up. The return of the Chill One is officially in effect :-).

Good to hear from Chill Rob G again. Ride The Rhythm is one of my favourite LP's of all time so some unreleased joints would be a lovely addition to his catalogue.