Check out this super rare 80s footage of the ALL OUT KINGS, namely MESH, REAS and VEN, bombing the 57th Street lay-up in New York City around 1989. This Super 8 film footage and soundtrack (all courtesy of MESH himself) includes the trains arriving, the heavily tagged insides, and scenes from the platforms. Here's a few words from MESH.... 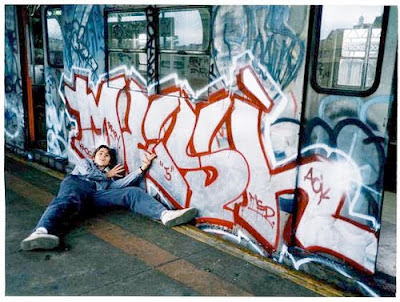 "I'm MESH. That's me up in there (allegedly) and that's my man Smog up in there too in the video.

That crazy looking abstract squiggly car that shows in the first half of the video was from a previous night with my musical partner, Flasha TR Nation. We're joined at the hip even onto today. Right, bro? We just bugged and played with the absurd (even like you see in that S of the mini Mesh piece at the end of the other car) in those letters. It reads: Mesh Flasha. This is after I had done burners if anyone wants to know. Just wanted to be absurd that night and push the limit of what's acceptable, what's predictable and even expected within graffiti. I think it took 20 more years for people to go against the grain like that and poke fun at the very act of what you're doing, while still making something that's just complete looking and right - dope.

You can see my current work as well as many vintage flicks of train cars etc. on my website: http://meshrock.com. Drop me a line there and say what's up.

That's a track of mine playing in the background titled: Mesh Rock. You can download it from iTunes here. I hope you enjoy this extremely rare bombing footage from the heyday of graffiti. Peace....MESH"

I'm reading: AOK at 57th Street LayupTweet this! Posted by Daily Diggers at 11:57

This is crazy footage! I met one (No Names Hahaha!!) of them a few times, he is a famous Techno DJ now. Makes you wonder how much more footage is out there right?