Take It Back To Bring It Forward

2012 was a great year for new hip hop music and 2013 is already looking interesting when it comes to boom bap Hip Hop. And I'm happy to say it's not just transatlantic artists which are impressing me with their output - the UK can also be proud of some of it's homegrown talent that are currently putting out beats. Last year my favourite release from home shores was SIR BEANS OBE "Pause to Discuss" EP. BEANS really has put yeeears into this hip hop game and this is glaringly evident from the production quality on this release (the title track is so damn dope!)
On to 2013 and it's another producer from the UK that is a healthy making noise with his debut album. Swansea based DJ turned producer BEATRIX brings the golden era back to present day with a selection of drum heavy beats featuring a host of very competent UK MCs including MYKES, FIGURE OF SPEECH, SAM OTIS plus others including the aforementioned SIR BEANS OBE performing cuts on one joint. The sound is very much reminiscent of the Golden Era and BEATRIX himself admits to heavy vinyl sampling and a love for headnod beats. But the golden era vibe never feels forced during this album as can be with other "golden era" inspired tracks. 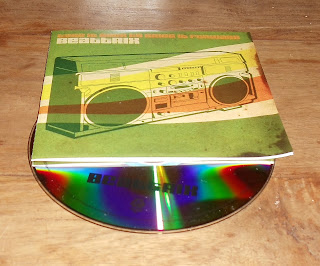 In fact some of these tracks sound like they could actually have been recorded in 1990 or 91, so authentic is the vibe. BEATRIX has tailored the beats individually for the varying MCs so the feel of each track is wildly different as you progress through the album, keeping your attention locked throughout. The project was mixed and mastered by UK recording legend NO SLEEP NIGEL so you know the sound is crispy too. "Take It Back To Bring It Forward" is available on CD as well as available for download at the usual legit spots. However if you prefer a physical copy on CD then leave a comment below and I'll throw names in the hat for a free CD copy. But first, check out the handful of soundclips below and hear what all the fuss is about...

JUNCTION 45 present BEATRIX "Take It Back To Bring It Forward"

Remember to drop a comment to be in with a chance to win yourself a copy of the CD.

I'm reading: Take It Back To Bring It ForwardTweet this! Posted by Daily Diggers at 10:37

Sweet beats there, thanks for sharing! If I win this I'll have to pump it loud. Got it on vinyl by chance?

wow thats sounding dope KD. Can I be in it to win it???