Put the Needle on the Record...

During the dark ages, a long time before such inventions as CDs, iPods, mp3s etc. were invented, people played recorded music on circular slabs of vinyl known as "records". Now these could be played at 33rpm (revolutions per minute) 45 rpm and even 78rpm using machines that were very unimaginatively called "record players".
But then in the 1980's some bright spark at Phillips decided to (attempt to) kill off vinyl by inventing the Compact Disc. At that time the buzz was that these CDs were much smaller than records, offered superior sound quality, plus you could cover them in raspberry jam and put them in your CD player and they would still play OK! Well nearly. But I remember in the 80's everyone said the days of vinyl were now numbered, because of this new invention. I freely admit that I hated CDs at first (and still do) so I took great pleasure in the latter stages of the 20th century when mp3s arrived on the scene and began to kick the the CDs arse! It felt like the old school bully finally got his come-uppance. 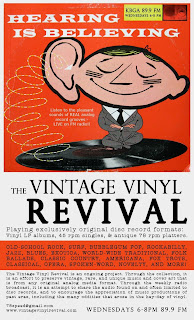 But however hard the music industry tried, they just couldn't expel the love of vinyl from people's hearts and minds, and now I believe the 7 inch single is making an incredible comeback - Hurray!
The only drawback of vinyl was, and still is, that you do have to handle these babies with extreme care, always replacing the record in it's sleeve carefully after playing, and try not to damage the groove part of the wax. It's a shame, however that so many records over the years were not handled with the same care, and hence condition is paramount when buying a vinyl record. Plus a plethora of deejays and turntablists over the last 20yrs means a lot of Hip Hop/Breaks vinyl can be pretty much trashed. But please do not despair....if you like to treat your wax with a little TLC, and you get annoyed when finding a gem of a record whilst digging only to find out it has a skip or pop this will be of interest to you. In fact maybe you should scrub up, put on your surgical gloves, have nil-by-mouth for at least 12hrs, and then head off to Kid Dyno's Record Surgery!

A month or so ago at our weekly Record Club, my wax buddy the Beat Detective brought with him a CENSORED LP with a funky drum break on it. The problem was that although the vinyl looked to be in great condition, there was a "skip" of all places right in the middle of the drum break itself. DANG! Don't you just hate it when that happens?
But no fear, KID DYNOMITE is here with my tried and tested method of removing jumps and scratches from your highly prized slab of wax. Now I must point out that this method does not work on all record jumps, but if you can spare 10 minutes in the day and you do not want to search for another copy of the record, I suggest you read on...
All you need is one record with a skip on it, an old stylus (preferably not your new one), and a cigarette. For the non-smokers of you out there, may I suggest you ask a friend who smokes for a spare. Or you could buy a box of ciggies, use one and send me the other 19! Puff Puff!!
Seriously though, the cigarette is used to re-cut the groove back into the wax without applying to much pressure to the needle. Fit your old stylus and cue the record up so it is placed just before the skip happens. 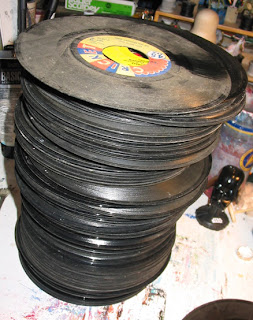 Hold the cigarette by the butt, and lean the white part on top of the stylus cartridge. As the record revolves and reaches close to the point of skip, apply light pressure downwards on to the cartridge (don't worry if you use too much force the cigarette will either bend or snap). This may not work the first time, but be patient and try this several times, applying slightly more pressure each time you do it.
Some skips will disappear almost immediately if luck is on your side, but in most cases you will need to repeat the above operation several times in order to "re-cut" the groove as it was meant to be. "Come on KID that won't work!" I hear you cry. Well trust me on this one I have saved many many records from the scrap heap using this method. Don't get me wrong, some records are so obliterated that you will not be able to retrieve a decent playing copy, but if you were to ask me how many times it will work I conservatively reckon you will be successful in at least 50% of your attempts. My success rate is slightly higher than that, but I must have done a hundred or so in the past so I tend to know which ones can be saved and which ones are still gonna be destined for the bargain bin in Oxfam!

As you can imagine, when I fixed Beat Detective's copy of CENSORED LP there was a stunned silence in the room. Damn it was like I had cured cancer or something. But I guess if you are a vinyl lover then a trick like this can only be useful to you. Needless to say we sampled the drum break after the operation and it was virtually impossible to hear any remnants of the skip. Not all cases will be like this and sometimes a faint click or pop will remain, but at least you can play the record through from beginning to end. Give it a try, and don't forget to use an OLD stylus - man I don't want y'all complaining to me that you snapped your £100 stylus on my instructions now do I??
Once the skip has been pleasingly removed, I then suggest giving the record a good clean. While the most common method of cleaning off lightly soiled records is the use of slightly soapy lukewarm water and a light brush or cloth, there are certainly those audiophile theorists that will point out that undistilled water will leave behind mineral traces in the grooves of the disc, and that soap will just generally get in there and have all kinds of drunken, debaucherous parties deep in the groove! Using small amounts of alcohol is also both recommended and frowned upon, because while alcohol can act as a solvent, it will also remove much of the oils within the vinyl grooves. Less oil in the grooves means less lubrication for the needle, which means increased friction, which means increased heat and can obviously result in damage. And don’t even think about using hot water - heat is the mortal enemy of vinyl! But unless you have time to prepare some quadruple-ionized water I suggest you go the soapy water route. 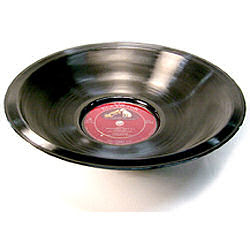 Please ensure you clean in an anti-clockwise direction and moving inwards towards the label as you go. But if you remember just one thing from this post, let it be that you should NEVER play dirty records. It will dullen the sound from your all-important (and usually very expensive) stylus, and any dirt that the stylus picks up will be dragged through successive grooves and carve them up like a psychopathic butcher!

...now it's clean your record is ready to play and enjoy! If however you tried in vain to remove the skips, and other scratches and pops are too prominent, I suggest you make a novelty ashtray out of it (see above) and then smoke those other 19 ciggies!

(Oh and by the way, the break LP title has been censored for your own protection and also to maintain the BEAT DETECTIVE'S secret-squirrel arsenal of dope drums) LOL! And speaking of the secretive Mr. Beat Detective, here is the only known photo of him below.... 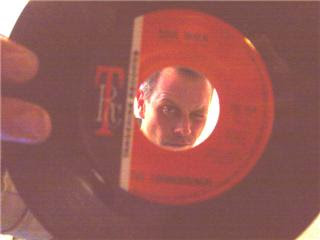 I'm reading: Put the Needle on the Record...Tweet this! Posted by Daily Diggers at 11:32

ayo thanks Kid, wonder if it'll sort the Pressing fault on the Jay dee remixes 12"? Is it going to be covered labels in February then????

I have tried to cure pressing faults but they are near impossible, mostly because there is no original groove to "re-cut" to that will play OK. Life's a bitch!

And as for February - I never cover my labels or soak them off in the bath like some DJs used to. I like to spread the love not hoard it!!

Keep up the good work on the MI show - I hope the studio is fixed reeeal soon!

the studio is partially fixed so shows should be back to normal soon (last nights just uploaded), just giving you abit more time to sort that guest mix out ;) Is that a mini beat detective you posted? Theres no way his face could fit in the middle of a dinked 7" in real life!

cheers..good stuff. are there any tips on how to straighten a warped/slight warp on a record??? thanks

sportbilly - I have had mixed results when trying to flatten a warped record, but one method which can be sucessful is as follows......

a. 2 panes of smooth glass (bigger than 12 inches squared)

Put the wax in between the 2 panes of glass which MUST be perfectly clean and smooth!

Sit the house bricks on top at the edges of the glass.

Leave in the sunlight but check periodically and regularly that it is not too hot and to check on the warp's progress. The weight and warmth combined will flatten many warps.

I don't suggest using this method on a RARE or valuable piece, but it can be very successful. Also do NOT try it on a really hot day!

best of luck sportbilly and hope it cures your problem.

Kid Dyno Thanks fella for the advice one of my rarest pieces is warped a bit but plays on good decks like techs. So i'll be waiting til summer to check the method homeboy.

Great stuff Billy glad to be of help to you. Don't forget go cautiously with the time you leave the wax in the sun.