edit on 17th Feb '08: Great launch party in Brum...thanks to the whole peeps up there 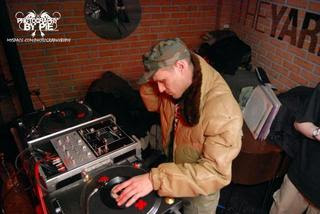 for their warm welcome and to the crowd for dancing all night, and knowing good music when they hear it. We hope you enjoyed the vibe as we did - props and thanks goes to DJ Cro, Stilts, Roy Roastbeef, Wattsy, Ricky Reissue and the Crate Escape Records mob. We look forward to our return. And we can't forget Liam at CENSORED record store for the vinyl treats and a cuppa tea - the perfect hangover cure! .....kid dyno

I never thought I would answer "YES" when first asked this question.....but when we first heard the snippets of the KURIOUS JORGE Demo Sessions a few months back, we were amazed to find these tracks were, in our humble opinions, better than some of the tracks that made JORGE's '94 LP release "CONSTIPATED MONKEY". Now don't get us wrong we love that LP and in 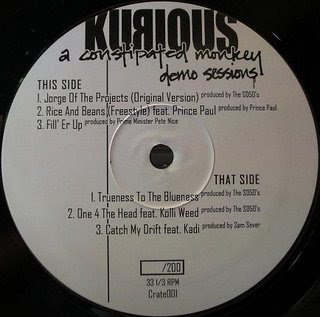 particular "Fresh Out The Box" is a tune always on rotation with the Diggers. But here KURIOUS sounds more relaxed on the mic, and the Sam Sever/Pete Nice/Prince Paul/SD50s beats are perfect fodder for his flow. No dilution - just raw beats & rhymes. Some seriously funky b-lines and chunky drum loops are the order of the day here, encapsulating the flavour of the time perfectly. These demos give you the impression they were created with nothing in mind other than to rock his shit lovely, rather than aimed at attracting a deal or pleasing the million dollar record company execs. And we have always admired Kurious's style of delivery, and sense of comedy. Remember how he made us "walk like a duck"? And the "two tumours in my bloomers" incident?? Plus anyone who brings Grimm Reaper to the mic deserves a handshake in our opinion.
Now Crate Escape Records bring you the vinyl releases of KURIOUS the DEMO SESSIONS, available exclusively through Jibbering Records and the brainchild of DJ CRO at MAIN INGREDIENT RADIO. Check out his weekly show on www.newstyleradio.co.uk Monday nights 12pm midnight for the dopest new Hip Hop releases plus some vintage butter. It's dope-on-rope YO!
KURIOUS has always been a fave MC for a lot of people, and it's a shame there wasn't more dope product from him available before. After all he has been down with The Beatnuts, Stretch & Bobbito, Pete Nice, Groove Merchantz et al for years! We feel he was capable of much more, so props also goes out to Stonegroove Records for "All Great" in 2001 which we recommend highly (Props to Mr. Lawson).
So it's all good for JORGE fans - please spell it with a "J", not with a "G"!! 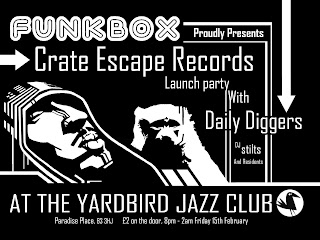 Pre-orders have kicked off this weekend, so don't dilly dally or prepared to be disappointed. It's limited to a wax pressing of 200 hand-numbered copies with dope sticker cover created by STILTS. And those of you in the UK who wanna make the KURIOUS DEMO SESSIONS launch party in Birmingham on Friday 15th Feb - we hope to see you there. We will be dropping some funky shit on the night for you breakfiends!

soundclip from the DEMO SESSIONS


THE TWO TUMOURS INCIDENT
"Hi!! How's it goin alright fellas
Ladies and gents, welcome to a new edition of uhh 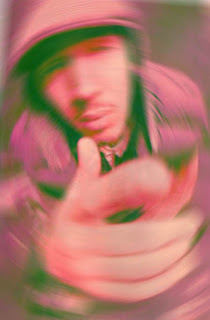 Tap Talk USA with your host..
Louis.. St. Ide's Donkey Dick, yeah
Today we will be interviewing my pal my good buddy uhh
Big Al
[Willy Scratch]
Willy Scratch, that's me, Willy Scratch!
I like to scratch my ass!
[announcer]
How you doin Willy Scratch?
Well when the lemonade is on the line,
and the milk is in the back pocket,
and the burgers are on the floor,
what do you like to do most?
[Willy Scratch]
Aww I scratch the two tumors in my BLOOMERS!
That's what I love to do, it's the best!
(JE-ZUS CHRIST!! BROTHER LOVE LOVES YOU)
Ohh-kay, that's a little word
from our preacher over here on the right, but uhh
When the uhh shit hits the fan,
and your uhh, tissue hits the hand,
and you wipe the diarrhea and you put it in a pan,
what do you come up with?
[Willy Scratch]
I get golden showers on my fucking asshairs
and on my mustache I wipe it in your glass! HAHAHA!
(Je-zus save you! BROTHER LOVE LOVES YOU)
.. I wanna say a few words to you guys,
that I've been thinking about backstage.
[Kurious]
Three cheers for my peers for the brew that I'm consumin
No knockin what I'm rockin cause my confidence is boomin
Sort of like a eight-oh-eight, but a fake note
Not (??) again loop, without a paid show
(Daaamn) Take a quick dip in my moat
Kurious the magician I'm laid back like dope
or valium, or (??) be chillin like I wanna
A freezer full of 40's and a pocket full of scarma
Shit is on the verge to break
Throw on my fluffy white hat with a tendency to bake
motherfuckers til they're cripsy, I mean fuckin BURNED
Bout time that you learned kid
Check what I did flip the lid of my brew
Givin a quip (??) a dollar or two
C.M. crew, rocks more pull than a ox
(Where can I check this out?) Fresh out the box"
Fresh out the box.. -> Run-D.M.C. {*scratched*}

hahaha thanks for the amazing set and laughs you two gave us all, pleasure having you play, first of many gigs in Brum. Secret squirrel on the record store too ;)