Hey ya'll. Yeah I know it's been a little light on the post front again recently. I can only apologise to my regular readers and put this down to there not being enough hours in the day, or enough days in the week to do all the sh!t I gotta do. In fact I'm starting a campaign for an eighth day of each week.....it will be added either before Saturday or after Sunday, and this day shall be called "Breakday" - where everyone must stay at home and play breakbeat records all day! ;o) 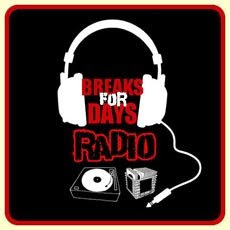 So to make up for the lack of recent blog substance (although I hope you dug the recent Slick Rick remix) here's a mini podcast lasting just over an hour for your eardrum pleasure. It's no super duper big budget mixtape...but there's a little hip hop flavour from 1987 and some illy Funk breaks and even a dash of Disco! Yep that's right I said Disco. But in true BREAKS FOR DAYS RADIO style it's an hour of serious high quality music.

So click play below, put on your dancing shoes and get busy by your bad self....I hope you enjoy it whether you are out in your whip, diggin' for beats, on your skateboard, on the bus, at home, in the lab, or wherever you may be....