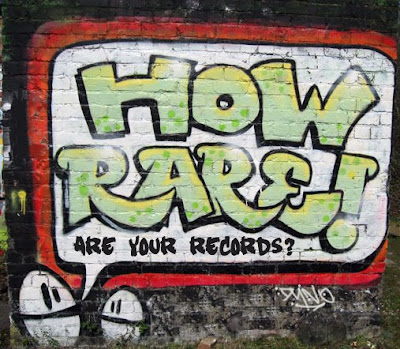 It's impossible to judge how rare a record is based on a single internet auction price. In fact quite the opposite, I have seen some wack records on major labels make serious loot, and some of the rarest records I have found have been in the bargain bins! But maybe that's down to the record shops not knowing their stuff.
Over the last 5 years or so I have seen a record make sometimes 10 dollars on ebay, then later make upwards of 100 bucks, only to then drop down to a regular 10 dollars again. Obviously it depends on who is online at the time, and how fat their pockets are.....but also people's buying trends are so easily affected by the latest dope mixtape doing the rounds at the time. Examples of this include DJ SHADOW's and DJ IVORY's mixes - these together spawned an alomost fever-pitch buying bandwagon on ebay's "random" rap listings (as did the Brainfreeze mix with funky 45s). Pure craziness....especially if you remember the times when you could not GIVE away your Hip Hop vinyl??
So a price does not determine it's rarity, only it's desirability. OK so maybe a more detailed look on excellent websites like www.popsike.com would provide you with a more rounded view on an item's price over a certain period, but even this can lead you up a garden path in regards to a true value. So to us, a rare piece of wax is one that we have only ever seen a few times despite all our diggin missions, or never seen at all!
And let's not forget, a RARE record doesn't guarantee it's gonna be a DOPE record! Although we can grade a record's "coppability" thus so....

...and we also have a side category for "shit that you saw once at a spot but never copped, and are still regretting it to this very day". Damn I know we all have records in this categrory!

So now let us drop a few rarities from the above categories......

PETE ROCK & CL SMOOTH - MECCA & SOUL BROTHER instrumental LP
There are many bootleg versions of the INSTRUMENTALS from PR & CL's 1992 debut LP "MECCA & THE SOUL BROTHER", but the original double LP featuring just the beats was a promo-only item handed out by the artist/label on the ELEKTRA label at time of release. These awesome 2 pieces of vinyl show off PETE ROCK's amazing beats without the rhymes layered over the top. And in many parts you can hear shit going on sample-wise that maybe you missed on listening to the vocal LP. DOPE STUFF! 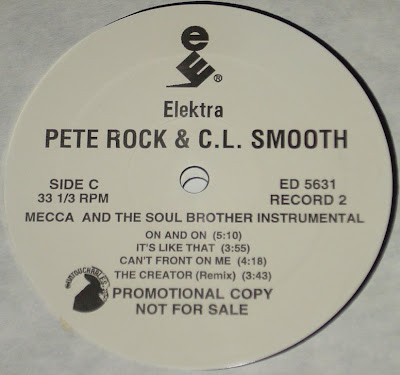 This double vinyl treat is super hard to find, and considered a definite HOLY GRAIL by many hip hip collectors. I had almost given up on owning a copy despite offering to sell my grandmother to buy the copies that I knew existed in the hands of fellow diggers. But anyone who owns this record and knows their onions will not part with it without a fight! After almost 10 years on the hunt record karma finally kicked in and I eventually acquired two copies in the space of a month or so (damn what is it they say about buses???). It just goes to show that you should always persist on the hunt for a particular gem and never give up. Obviously you must always dig hard for it, but also tell as many people as you can that you need it - record dealers, fellow diggers, online stores etc etc..

PETE ROCK & CL - ON & ON instrumental


EMBRYO SALES MEETING WINTER 1970
The cover of this LP tells us this is a special promotional record to promote EMBRYO (what seems to be a fledgling label), together with a quote from Herbie Mann "These are the first music expressions on EMBRYO. For us it's a new beginning. Our goal is to remain as naive as we are today." 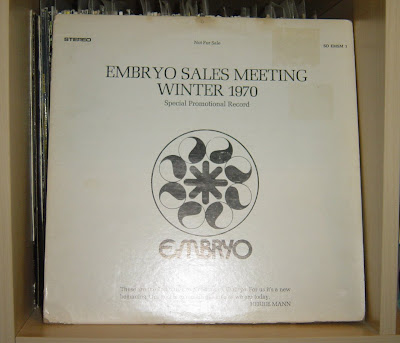 I'm lead to believe this LP was a sampler for said label, and features music from Herbie Mann, together with bass legend Ron Carter, Brute Force and Atilla Zoller. On finding this LP in a pile of frisby records, that tingling sensation that you get down the spine told me to put this in the must-buy pile. I didn't have my portable turntable that day so it had to be a purchase based on a hunch, luckily one which paid off handsomely. Damn I love that feeling, especially when it's drums.
I had never seen this record before, and I have never seen it since, so this one goes in the NUGGET category.


GLADYS KNIGHT & THE PIPS with FUNKY JUNCTION "Especially For You"
Man....what a wack cover, and surely there are no treats on here?
Yep I passed this LP by for years until BEAT DETECTIVE showed me how dope the FUNKY JUNCTION joints are. 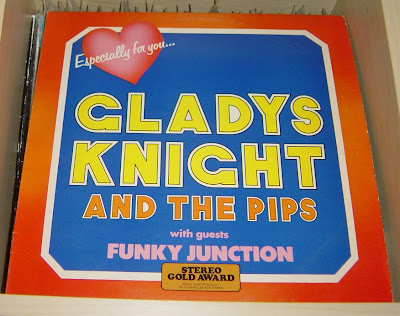 Why on earth GLADYS KNIGHT and her PIPS agreed to let a practically unknown band feature 2 songs on this LP is anyone's guess. But I'm glad they did....cuz the tracks ROAD'S END and TALKIN' TRASH are both killer.
Most of the album is very early R&B tunes from Gladys Knight And The Pips when they first got started. The last songs on each side are by Funky Junction who were studio musicians put together by Leo Muller. I beieve one of these dope joints also appears on other albums entitled "Acid Test". Please tell me more if you know about it.
This LP turns up regularly at charity shops, boot sales, bargain bins and normally priced under a pound (2 dollars)...so grab it whenever you spot one. And it's a fairly easy piece to find so it fits the BARGAIN BUY category nicely.
ROAD'S END is a great uptempo banger with drum break intro and a headnod feeling to it, even when the guitar takes over.
TALKIN' TRASH starts off mellow with a sinister bassline with shuffling yet crisp drums in the background... then kapow! takes it up a notch with some fuzzy wah wah guitar and drum rolls, only to breakdown again later. Have a listen...

Kid Dyno
I'm reading: How Rare?Tweet this! Posted by Daily Diggers at 19:44

Someone told me that Funky Junction is none other than the band Thin Lizzy less Phil Lynott.

Don't know if thats true though.

Hey man, since you asked about it- Those two Funky Junction songs are better known as being on the 'Purple Fox' Hendrix tribute album (also released under a few different titles like Jeff Cooper & Stoned Wings). Those songs were recycled several different times (I guess by producer Leo Muller).

Jamie...thanks bro I was hoping someone could fill in the gaps on FUNKY JUNCTION tracks...I will keep one eye open for JEFF COOPER etc..
.
Someone else suggested FJ may be Thin LIzzy without Phil Lynott????

Talkin' Trash is a great one to play out!

It looks like it is Thin Lizzy, I remembered it was my mate Cancer Scabies who told me that. He's also got the other chazza classic by them 'A Tribute to Deep Purple'.

theres more tho
basically if you see a stereo gold award l.p check if any of the tunes have leo muller in brackets by the side and it might have some dopeness!!

Yeah Brute Force is a nice cut. I have my VG++ copy of Embryo from the 99 cent pile!