What do you get if you cross a Large Professor with an Albino Gorilla? A Large Gorilla? An Albino Professor? Actually the 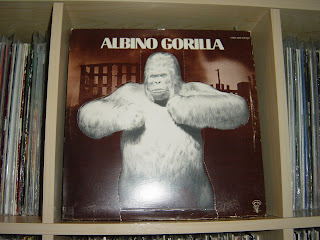 result is a dope hip hop track from 1993 featuring Akinyele on rhymes with his trademark pitch-shift on the punchlines. I remember some people weren't feeling AK's rhymes when he came out, but backed with production by Large Pro it was obvious he was gonna blow up, and his Long Player "Vagina Diner" became a classic. That's why tracks like "The Bomb" and "Ak-Hoo-Hoo" still create a buzz even when dropped at a party 15 years after their release. Although Ak's follow-up product was not always as good, it cemented his place in hip hop history. But with Large Professor on the boards that was hardly a surprise. 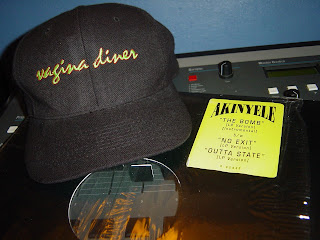 For the track "Outta State", the label credits "Psychedelic Shack" by The Temptations, but it was actually ALBINO GORILLA's 1970 version of this track that Extra P flipped. I searched high and low for a clean copy of this LP, but sporadically it would pop up with the cut-out gorilla missing from the cover, so I left it. Recently I found a much better copy with Gorilla and all, so finally I can bring you a little break to the beat action.

The pitch-shift style as you say is the best part even when slightly losing his breath. Ak's a punchline comedy genius,a clever hardcore MC, shame folks never see beyond the brilliant gimmicky style. No one sounded remotely like him, and it's characters like Ak that the game's missing right now.For real.Thnx for the low down on the Albino Gorilla,Kid!
P.

yo many thanks for tuning in bro, and for your great comments.

That AKINYELE LP is still incredible 15 years later - we still rock that on the regular. "Worldwide" is also a Daily Diggers favourite!

Yeah I remember that feeling when a new style MC would come out back in the good old days!

first heard Ak on a stretch and bobbito tape from 93, and found vagina diner, and it has been my all time fave LP. his other Lp's didnt match VD, but the recent eastern conference CD was ok. wish he would do another Lp like VD with large pro and rob swift.