I recently received an email enquiring about an LP cover I had inadvertently shown in a photo on a previous post. "What's the deal with that CORYELL LP with the nude action on the cover?" I was asked. Well ... here's the dilly!
Texas-born LARRY CORYELL studied many instruments before becoming known as a guitar master. In the late 60s through to the early 70s he was one of the most in-demand guitarists in Rock, Jazz and all musical genres. During that time Larry was part of Rock's experimentation, and toured with Jack Bruce, and featured in sessions with Jimmy Webb, the 5th Dimension, Charles Mingus, Billy Cobham, Chick Corea and John McLaughlin to name a few. 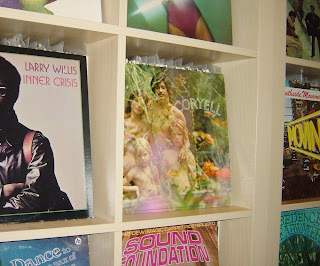 His vision to merge musical genres helped shape the sound of music during that period, and although his name may not be instantly familiar, no doubt you will have heard some of his music.
My first encounter with the sounds of CORYELL was through the use of his music by other artists, most notably BIZ MARKIE's use of "Morning Sickness" on his track entitled "On & On" from the "I Need a Haircut" LP. It took me a little while to find out what BIZ was rhyming over, but all the best diggers persist and eventually I dug up CORYELL's second LP release, and BINGO! Plus as a nice bonus there is also a surprise drum break in the middle of the track "No-one really knows". Thanks Larry!

This latter track has also been sampled but I cannot recall which artist or track used it. If YOU know then holler at your boy Dyno. And next time you're out diggin', keep one eye open for Larry.

(oops it seems as if I have again inadvertently shown some other great LPs in the photo. Some serious drum breaks there - a special prize goes to anyone who can name all 9!)
I'm reading: Larry Coryell - Morning SicknessTweet this! Posted by Daily Diggers at 23:17

maan, that coryell record is ridiculous! a sod of a record to find too....is this his best album,Dyno?

break was used for THE UN on 'GET YO****',not sure if that one was looped/discovered by Roc Marciano? either way one for the headz no doubt.

Pretty Purdie on the drums on the Larry Coryell LP - sounds so good!

Break No.1 of 9 = Pleasure "Celebrate the Good Things"

Hey P, I only have 2 CORYELL LPs, and this one (his 2nd I believe) is by far the best. Not that easy to find though.
I need to hear that UN joint.

Stu - nice spot on the PLEASURE cover, there wan't much showing. Only 8 more to get LOL. And the one on the left of PLEASURE may be too small to give the game away.

the coryell .morning sickness' is ill. I also like how it's used in the biz track to simple but appropriately dope effect great sounding kick and snare..cheers for the science kid Dyno - appreciated.pz P.

OK - some others I can recognise:-

1. Southside Movement - Save The World
2. Monk Higgins - One Man Band

I think the top right may be a Temptations LP (??)

Love the blog. Keep it coming.

well spotted DJ 10/6 you have good eyes. And thanks for your comments, keep spinning yo!