Everybody loves STRETCH & BOBBITO radio shows. Throughout the 90s their 89TEC9 radio show dropped some of the illest hip hop records that came out, some that didn't come out, demo tapes, underground exclusives, and a whole heap of freestyle sessions with your favourite rapper at that time. And remember this was at a time when HOT97 was supposedly ruling the hip hop airwaves in New York City. But not so, STRETCH ARMSTRONG AND KOOL BOB LOVE would set the roof on fire on a very late Thursday night show on WKCR, 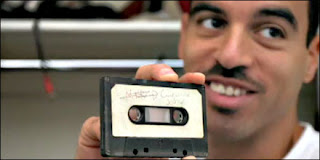 and this is what real hip hop heads listened to. (Also I gotta say that the DJ RIZ and CYPHA SOUNDS shows were dope too). HOT97 for me was too commercial, even back then. Ok so they had MARLEY, PETE ROCK and RED ALERT etc. hosting shows, but it didn't represent the underground sounds like STRETCH & BOB. Plus you have to love their sense of humour.
To this day STRETCH ARMSTRONG and BOBBITO still get a whole lotta hip hop love. And their radio shows - they've now become part of hip hop history.
Peep this show from February 26th 1998, featuring YOUNG ZEE and PACE WON feestyles, plus guest appearances from BLACK THOUGHT and COMMON right at the end. And not forgetting some dope late 90's beats. Enjoy!

...and check out BOBBITO reminiscing about the those good old days on WKCR 89.9FM. The SOURCE magazine even voted their show the best Hip Hop radio show of all time. Say word!

Thanks for the Tape Rip!

I have more Stretch & Bobbito shows posted on my blog you should check out...