Boomin In Ya Jeep

I like to consider myself a bit of an expert when it comes to vintage hip hop records, but every so often I stumble across a record that I haven't seen before, know nothing about, nor have any idea 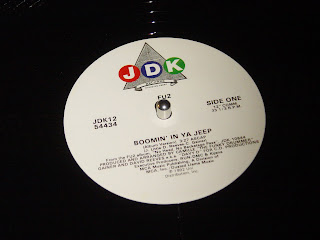 what it sounds like. It happened this week whilst I was hitting my regular North London record spots, and the price tag was only £3 so at this price I was happy to take a blind punt.
OK so the track title "Boomin' In Ya Jeep" sounds very dated now as far as hip hop terminology goes, but it was fresh back in 1992 when this record was released. I have never even come across the label JDK records, although there is a mention of DAVY-D in the production credits, and even RUN DMC as exec producers (for what that's worth).
The track isn't half bad, and for 1992 the beats sound more than competent if a little sparse. Certainly got that head nod shit going on. Check it out, and tell me more about FU2 if you know anything.
FU2 - "Boomin' In Ya Jeep" 1992 JDK RECORDS

I'm reading: Boomin In Ya JeepTweet this! Posted by Daily Diggers at 19:43

Nice track Kid - would like that in my racks.

yo thanks for the info Dave, I knew someone would know more.

I hope all is gravy with you.

One that slipped under peoples radars i think, cheap but dope record...!!

echoing dave comments, deffo jmj's label.
this used to get bumped by dj leaky fresh (of sunset radio in manchester), always really liked it, took me several years to track down a copy (from beat street r.i.p), but was well worth the wait, especially like the sound effects near the end of the track. he also used to bump the dirtier b-side track on his how, oh how i miss those days...

"turn my shit down, how that sound i like to blast it/ f&*k with the volume on my benzi get your ass kicked!"

im sure i read something about them getting into trouble for the "controversial" track 'no head no backstage pass' kind of strange seeing as that same line ended up in Robbie Williams 'Rock DJ' (I think).

Jam Master Jay had nothing to do with JDK records. At the same time that Jay was producing acts like The Afros for his JMJ label, the other two guys from Run DMC (Joe Simmons and Darryl McDaniels) formed JDK Records with some dude named Kijana and produced acts like Smooth Ice and FU2. JDK stands for Joe Darryl and Kijana.

Jam Master Jay had nothing to do with JDK. While he was producing acts like The Afros and Fam Lee for his JMJ label, the other two dudes from Run DMC (Joe Simmons and Darryl McDaniels) formed JDK Records with Kijana and put out Smooth Ice and FU2.