Hip Hop has lost another of it's troopers yesterday with the sad news of RAMMΣLLZΣΣ's death. Damn ... it was only a week or so ago that I 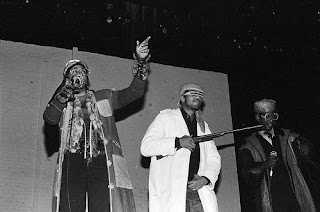 posted the video footage from The Rhythm Lounge from '83. So far I am unaware of the cause, but it just seems like we are losing too many legends lately.
RAMMΣLLZΣΣ started as a train writer, and progressed to become an emcee, and later an artist and sculptor. Despite being most famous in the hip hop community, especially for his distinctive voice on his "Beat Bop" record in 1983 with K-ROB, RAMMΣLLZΣΣ was of insular character - he even rhymed from behind those ski goggles of his. He Became in later years a master of the science of the alphabet. A little futuristic at times in his behaviour, even RAMMΣLLZΣΣ's graffiti and art work are based on his theory of Gothic Futurism. Despite "Beat Bop"'s success he only recorded his debut LP in 2004 some 21 years later. He will be missed but not forgotten. Rest in peace RAMMΣLLZΣΣ.

Photo shows RAMMΣLLZΣΣ and SHOCKDELL taken in The Kitchen NYC 1987.

EDIT: The NEW YORK TIMES reported RAMMΣLLZΣΣ's death and spoke to Ms. Zagari Rammellzee (his wife) who said his illness had slowed him down over the last few years and prevented him from pursuing a prodigious list of ideas. But she added that he never viewed death as an end, only a change in forms.

“His energy has just gone out to the Van Allen Belt, I’m sure,” she said, “and pretty soon it’s going to come back to us again.”
I'm reading: Rest In Peace RAMMΣLLZΣΣTweet this! Posted by Daily Diggers at 19:25