Love him or hate him, you cannot deny the contribution to Hip Hop that the big daddy of the airwaves TIM WESTWOOD has made over the years. From his days on KISS FM in London (when the station was still pirate), to his legendary CAPITAL RAP SHOWS of the 90's and collaborations with MARLEY MARL, 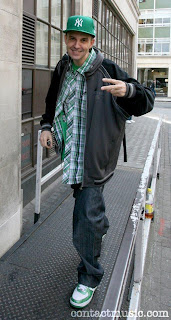 TIM brought only the freshest hip hop sounds to our ears. I personally sat locked to my radio dial on many a late night as a teenager and into my 20's, not wanting to miss the exclusive joints TIM would play. A blank cassette was a must. How many UK hip hop personalities can claim to be receiving props on records as far back as early ICE-T records, and photos on the sleeve of 3RD BASS albums? Not many. TIM WESTWOOD still plays his brand of rap for the new generation on BBC RADIO 1, and although I might not agree on his playlist these days, I cannot disagree that WESTWOOD's sounds influenced me a lot. Some of the old cassettes I have of his shows contain tracks which never even got to see the light of day. The thought of his record collection scares me.
Anyway, it would be so easy for me to simply drop an old WESTWOOD cassette from back in the days, but I'ma take this theme in a different direction.
Those of you who checked out the WESTWOOD RAP shows back in the day will be aware of his trademark explosions, and the fact that he had more catchphrases than you can shake a stick at. "No left turns, no right turns, just straight ahead to the firing line!". Or something similar and just as random. People may knock him for sounding like a fool at times, but who else has lived the hip hop life over in the UK like big daddy TIM. Not many.

But another of my memories of the best WESTWOOD years, are those when he would introduce his show over familiar breakbeats that he would feature on rotation. Some of them became synonymous with the CAPITAL RAP SHOW itself as he would introduce the show over the beat. Let's reminisce shall we? 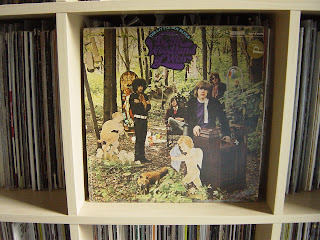 The LP features some tripped out moments, and "Seed of Love" is no different with some real tension building and drama thrown in. My vintage copy is a little battered so please excuse the crackles and pops in the soundclip. This was a WESTWOOD favourite simply because of the tension the record creates, but it took me enough years to find out the title of the band or the track itself, then a further long period of time to eventually track down a copy of the LP. I'm sure you will still appreciate it. made this JB beat his very own by dropping it regularly, and eventually just by hearing it you knew you were listening to the CAPITAL RAP SHOW 95.8FM. His format was crisp back in the day, and you knew you were gonna get a healthy dose of the good shit when TIM was on the dial. God bless you WESTWOOD.
I'm surprised how little I have included JAMES BROWN joints here on BREAKS FOR DAYS, maybe I will change that with a little JB dedication in the very near future. 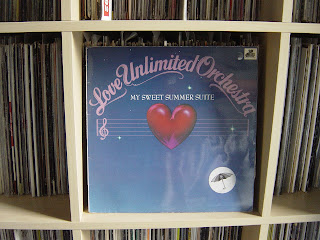 from 76. Again this was a firm WESTWOOD favourite for the start of his show, and being an instrumental he could let it play as long as necessary and talk over the top. I remember EPMD also successfully using this break to dope effect, on their rap banger "Manslaughter". Either way it's a great track and also a floorfiller - the strings build and build throughout and the bassline provocative from the beginning. Dead easy to find in vinyl too, check the bargain racks in your local record shop for this one.


And of course I found a copy of EXPERIENCE UNLIMITED "Knock Him Out Sugar Ray" recently (see posts below) which was also a WESTWOOD intro fave.

All that and not a pimped ride in sight!

I`m with you on this one Dom, i`m defo a fan of what WESTWOOD has done for hip hop in the UK. From playing dubplates & demos on pirate radio, to starting the JUSTICE label, to putting on shows with top artists, to the exclusives that like you say, never made it to wax, doing the rap exchange with Marley Marl, this guy had it going on in the late 80s/early 90s. Even acts like ULTRAMAGENTIC MC`s were sending him demo`s to play on his shows, that`s how much TIMMY was respected in the industry..!
I think the proof is in the pudding on how great he was by hip hop heads to this day, still fiending for old WESTWOOD shows..! He basically had all the fresh shit before anyone else, that`s why soooo many people put their cassette in & `PRESSED PLAY & RECORDD` !! ;-)

And thanks for posting those breaks Dom, always wondered what they were haha.

Also remember Eddie Drennon's "Do What You Gotta Do" being a regular favourite of the big dog...

Any luck up in Liverpool?

Yo fellas, you know WESTWOOD killed it back then.

Nice to take a post like this in an alternative direction. It was all about Strange Games... for me, synonymous with the show. Loads of old Westwood rips on DS if you're interested. Great read, Peace.

"keeping with the dub plate pressure..."

I loved staying up into the early hours to video N-SIGN RADIO on NIGHT NETWORK on fridays, even if he did play 'wild,wild west' or 'mr. big stuff' videos over and over, recall 1st seeing the 'My Philosophy' video on N-SIGN, remember the time Biz Markie came in for a chat, and when Demon Boyz performed..i think Westwood has always simply adjusted to the times accordingly.

The CAPITAL RAP EXCHANGE with Marley Marl was what i most looked forward to dubn' back in 89/90.

My favorite Background music he used was 'Rocket in the Pocket' and 'NT' on loop.
Thank you MR.WESTWOOD,we ALL owe you that.

back in the day memories again, love it.

@ Waxer, nice to see you around these parts Steve..! Even though you`ve just upped the average age on here hahaha.

Seriously though, good to have a true hip hop head on here to kick some knowledge..!!

Yes, Westwood's capitol Rap Show was essential. That shit stayed in my tape deck all through the week, and who used to play the 'Westwood impression game.' I remember dudes always joked about how real he was (public school boy, son of a bishop etc.) but lets face it, Westwood was an enigma. He created a character and never let his guard down, and that takes some dedication. I met him once outside London College of Printing and he was actually really safe to chat to. The thing I remember most was his Jeep's tax disc was out of date, now that's gangsta!!

The break I always loved that he played on the regular was that New Birth joint 'Blind Man' as well as all those Kenny Dope instrumentals too.

I am old enough to remember tim westwood playing soul and funk before hiphop in the uk.I also KNOW who bought hiphop to this country.Soundsystems.four in particular,Mastermind ,Rappattack, Good Times and Newtrament/rockbox.Mastermind's show on invicta fm was essential listening bringing over Bam,Whizz Kid,Jazzy Jay etc.The point is that tim westwood at this point was strictly playing electro music.My problem with tim westood is that from the start he never learned the hustle/mix,cut scratch rap (b-boy graf) unlike Max,Dave and Herbie from Mastermind.
tim westwood came after those speaker carrying heroes.He now earns a lot of money as a "professional whiteman" and should not be given any more credit than any other thief gets or deserves.I have tapes of tim westwood sounding like the posh public school boy son of a masonic bishop that he is."timothy" is long way from the roots of hiphop.

To be honest, i don`t really take much notice of what he does now but when i was younger, it was Timmy that had the dope demos & dubplates before anyone else on his shows. That`s why a lot of us late 30 dudes liked his shows so much.

There was another track he played all the time, as part of his intro or to talk over..was it a Jackson 5 record?

^ there was also the NEW BIRTH "blind man" loop he used to talk over.
I remember that was a much harder one to find out the track title, as was LITTLE BOY BLUES.

^^ Martin, it's true WESTWOOD had some dope exclusives and connections.

^^^ I completely understand where you are coming from on TIM's pedigree, and you obviously know your history and I give you props for that. I'm also fully aware of the 50/50 split of love/hate that WESTWOOD gets.
You will no doubt have spotted from my post that I am also in 2 minds about TIM (although for very different reasons) but you cannot deny or hide the effect he had on spreading hip hop music throughout the UK in the latter 80s and 90s. I know plenty of heads tape recorded his show religiously.

But true, he was not involved in the birth of the UK scene and took the shine that should have gone to other DJs/systems. And also true he was a moustache wearing soulboy son of a bishop (I seem to remember Norwich being mentioned??) who saw an opening in hip hop radio and took it with both hands!
And rightly you mention MASTERMIND, NEWTRAMENT, GOOD TIMES etc.. who created the true foundations of UK hip hop. This is the lesser known yet IMO more important side of the UK foundations which must be told - the truth does need to be heard. Please get at me at kidbiscuit@hotmail.com as I would love to continue this discussion. I really appreciate you leaving your comments ... as I said your facts are quite correct and your opinion a very interesting one.

Once again everyone stay tuned!

To be fair I don't remember ever hearing Westwood say he was the founder of UK Hip Hop?
It's a shame to see him playing up to the object of ridicule that the mainstream sees him to be nowadays. I will always have love for him because of those Capital / N Sign days though and the man has made a fortune for doing what he loves for 25+ years.
On the subject of the breaks, what was the "Ya ya ya ya ya...." joint?