Recently I mentioned some of my NYC diggin' stories from back in the 90s, and I dropped a few names of places I knew to hit back when records were the choice format in the Big Apple. Nowadays with many of these vinyl shops either gone already, or struggling to survive, it is important that us record heads support our local stores and in particular the specialist shops that keep the nostalgia for good music strong. Look at the recent sad closing of the FAT BEATS record store in NY. I personally can't imagine a world without record shops, and I hope I never live to see the day. 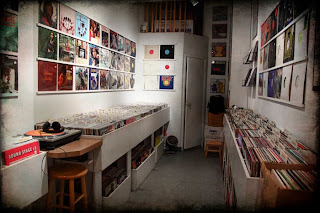 Fortunately if you search hard enough there are some spots still alive and kicking, and delivering the goods better than ever before. One such spot is BIG CITY RECORDS, located in East Village Manhattan just north of Tompkins Square Park at 521 East 12th Street. Behind the graffiti covered shutters and somewhat small shopfront lurks some of choicest beats in downtown New York, so don't be fooled by it's diminutive appearance. This place is a favourite spot for many record fiends and producers alike, as BIG CITY's stock stretches from the late 1960s through to the 1990s and is mostly out-of-print rare albums from the hip-hop, soul, funk, and disco genres.

We're not talking trash records here that see everywhere. The store relies upon contacts in the Northeast as well as private collectors from as far away as Tokyo for its steady flow of hard-to-find wax, which is fastidiously organized in the store for easy access to the digger. Even the much larger disco, soul, and hip-hop crates contain names not widely known plus the more obscure material from popular artists. A lot of record store owners could learn a lesson or two from BIG CITY.
JARED JBX is the main man behind BIG CITY RECORD's counter, and many of you will know him already through him working at TSL for several years before BIG CITY (my one regret is never getting to visit ther now defunkt SOUND LIBRARY during it's prime ... but I've heard all the stories). Jared was also involved in the release and distribution of OXYGEN's limited 45 single "Gone Diggin'" so he is also a man who recognises the real deal when it comes to new music. You may even have spotted him in this video of A TRIBE CALLED QUEST's Q-TIP discussing his musical influences. Incidentally ATCQ's "Jazz" 12" was JARED's first vinyl purchase at 16 when he chose to collect records to compliment his cassette collection.

From 1997 JARED worked at A1 RECORDS with Rob and Steve with whom he would later team up with to open THE SOUND LIBRARY in 97. As JARED tells it "A1 in 1997 was like no place I had ever seen and I have yet to ever see again. It was such an amazing store. That was before they remodeled it. It was falling apart, there was a hole in the floor, but it was just amazing. With all the people that were coming through, all the records they had there, it was a place in time when the interest in vinyl was really peaking so I just wanted to stay there everyday. And I did. I did until they gave me a job!"
Rob and Steve had tried to buy into A1 itself but the owner's reluctance lead them all to bring to the frame their own brand of record store and TSL was born a year later. TSL had a reputation for unearthing gem after gem and making it all available in one spot, perfect for the beat diggers! Stories like the DJ PREMIER "Step To The Arena INST" and "Cop Hell" promos springs to mind - we're talking grails here.
JARED and STEVE left THE SOUND LIBRARY and went on to start BIG CITY in 2007, TSL finally closing its doors a few years later.
JARED remembers well the pinnacle of the record buying game that came and went in the late 90s when money flowed freely. He admits that he see a different side of record culture now in 2010. Back then it was a frenzy of collectors buying rare records from all sides, where today more and more DJs are looking to sell up their records in favour of other pursuits and sometimes replacing with Serrato. But he philosophises well in that he often spends time putting people onto good music, only to later buy it back from them and pass onto the next avid listener. Life definitely goes in cycles.

What's your favourite part of the business?
"It took me a long time to realize this but after buying and selling records for 10 years at three different stores it’s the people. It used to be about the records and amassing a great collection. At the stage I’m at now it’s really just the interaction with people and all the flavours of New York and then just going through the motions of how that has changed. It definitely puts you on the pulse or the current of how your community has changed being in a record store and talking to people."

You see JARED is also a super nice chap as us Brits would say, and very very knowledgable when it comes to good music for the soul. If you are searching for something in particular (however unobtainable) you could do much worse than give BIG CITY a call, or drop JARED an email. They know their records.

Well known BIG CITY RECORDS customers include the likes of DJ Premier, Madlib, Large Pro, Q-Tip, Lord Finesse, Spinna, Just Blaze, Showbiz, Easy Mo Bee plus too many to mention.
I asked JARED what sort of wax a hardcore records fiend can expect to find whilst hitting the crates or perusing the wall in the shop...
"Pieces are kind of you name it we've had it ... Original Beat Bop on Tartown w/ Basquiat cover, Sweety G "At The Place To Be" original, Rappin with Mr Magic OG, East of Underground, Minority Band, lots of goodies!"

And yet there's more.... here's an exclusive download for us here at BREAKS FOR DAYS courtesy of JARED JBX himself. He knows how we get down with our beats, so he has laced us with this super dope selection taken from one of his Tuesday night parties a couple of years back where the guest was none other than EASY MO BEE (10.14.2008). Check it out ... 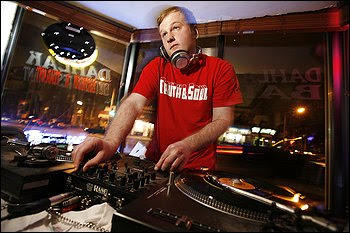 Get yourself down to BIG CITY when you are in NY and cop yourself some quality rare vinyl.

(Note: Some of Jared's quotes come courtesy of www.stashinrecords.com - thank you)
I'm reading: Big City Records NYCTweet this! Posted by Daily Diggers at 19:49

Yeah definitely a great shop, a must visit if in NYC & Jared is indeed a super nice/knowledgeable dude ...I for one find it truly sad that a lot of DJ's including some of my hero's are selling their collections ...if it wasn't for vinyl there wouldn't be Hip Hop music period.

The Big City, Lost & Found night at Savalas, Brooklyn is my favourite night in NYC all vinyl & yeah you never know who might show up …Edan & Ego Trip’s Chairman Mao spinning for Ricky Powell’s DVD release party last time I was there.

Big shout to Chris from Big City, Honeydripper from Daptone & Boogieman who rock sweet vinyl selections on the regular.

Hey Mac, good to see you up in here, and a great insight on Savalas thanks for that. It's YOU that has me fiending to get back to NY!

BIG CITY gets love from all continents. I will get there if it kills me....

and thanks for spotting my mistake re TSL closing. I have edited the dates, thanks for correcting me Mac. Props to you

See ya at Vinyl Veterans in November,

All good KD ...JBX sent me a Danny Dan The Beat Man set from Savalas as well as the Edan & Chairman Mao sets sure he won't mind me sharing with you.

Will discuss NYC trip at Vinyl vets ...I will be in contact soon to confirm all details sir ...

Funny you should start this thread Dom, as my mellow TONY P from SECOND TO NONE has just jetted out to NYC. The one place i told him to hit was BIG CITY RECORDS (the other was MOE`S SNEAKER SPOT). It`s nice to know that there`s still spots like this out there while record shops close left right & center! He`s taken a bunch of break 45s to trade with, so should be fun.

We`ll have to organise a DAILY DIGGERS `JOLLY` to NY soon D ;-)

Jared wasn't in the shop, but i still spent too much money in this shop this year on vacation. Academy is located in the same street.

Word Up man Jared and the homie Forest both work there. Both of them are really cool people and very knowledgable and helpful. Jared wasnt there on my last visit but Forest hooked up the drum breaks and samples. I didn't know he was the breaker I saw in the old rocksteady videos.

Good read. But you forgot to mention the later TSL at Orchard Street, they had a good couple years.